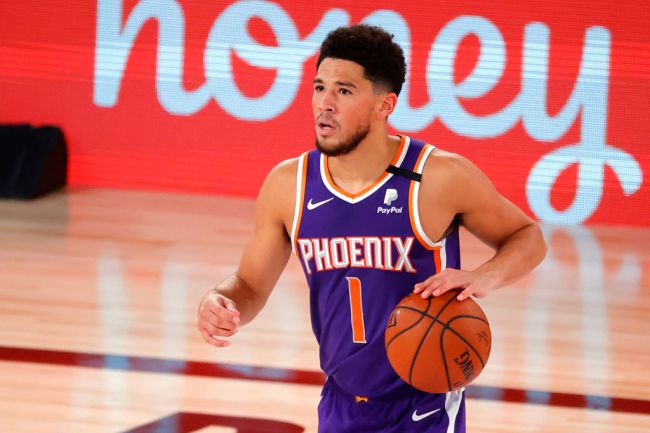 A week after “Suns in 4” guy became an Internet sensation, Suns fans were once again the subject of another viral fight video and Devin Booker is getting the blame.

After game 1 of the Western Conference finals, a video went viral showing Suns fans getting into a fight with two Clippers fans while people in the background yelled “Suns in 4.”

Considering the fight happened on the same day “Suns in 4” guy got free tickets to the game from Booker, some people pinned the blame on the NBA star for enabling fans to fight each other in an effort to go viral.

Hopefully an aberration but an expected byproduct of “Suns in Four Fan” being called a legend by Devin Booker and shirts of him being handed out pregame. Everyone is looking to be the next in line for free tickets and autographed jerseys for a viral video. pic.twitter.com/IC9hIVmMG0

This isn’t about Suns fans or Clippers fans or who threw the first punch. It’s about not celebrating violence at a game and people being able to go to a game without worrying about being involved in a brawl. I can totally understand a family with kids not wanting to go to a game. pic.twitter.com/P6PhAK0xz6

Give a dude a jersey and tickets now everyone wants the same treatment. Its like when people tried to put gorilla glue in their hair looking for sympathy. This is just sad. https://t.co/pkC4uhK1Vh

This is what the @Suns and @DevinBook promote. Congratulations on becoming the worst fan base in the NBA. https://t.co/Zb8tJFnO2C