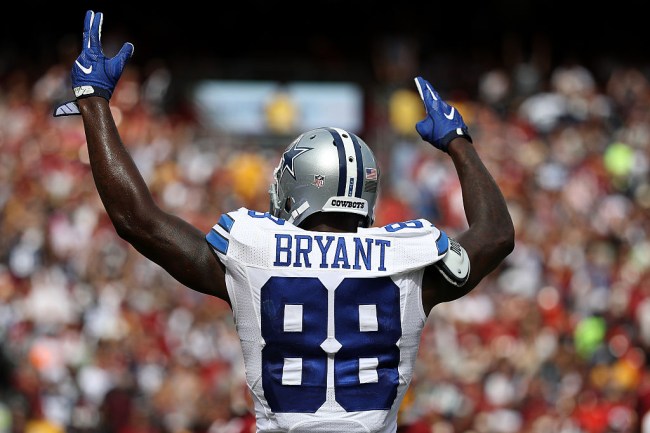 Dez Bryant hasn’t played in an NFL game since December 31 of 2017. While it’s been exactly 768 days since we’ve seen him suit up, he’s made it no secret that he’s looking to return to the field.

Just a couple of weeks ago he tweeted that his dream would be to return to the league and either play for the Cowboys, Steelers or Ravens. He’s even been working out and has apparently gotten back to playing weight.

Former Cowboys WR @DezBryant working with @DRobAlwayzOpen at the Sports Performance Center at The Star in Frisco today.

Dez is down 10 pounds in recent weeks and is at his playing weight again. pic.twitter.com/Tyasl6Go8a

While working out and throwing out some thoughts on Twitter is one thing, Bryant has taken an even bigger step towards a possible return. According to the Fort Worth Star-Telegram, Bryant has been texting Cowboys VP Stephen Jones letting him know just how badly he’d like another shot with the Cowboys.

“He has texted me that he would like to come back,” team vice president Stephen Jones said Thursday. “We have nothing but great respect for Dez and what he accomplished here. Certainly, as we look forward into the future we look at all opportunities and all potential players that could maybe help us out.”

Bryant’s definitely pulling out all the stops here to get some sort of shot to return to the NFL. He seems to be doing everything right and texting the VP of the franchise certainly isn’t the worst move in the world.

The now 31-year-old spent eight seasons with the Cowboys before being released by the team in April of 2018. He was then signed by the Saints, but two days after joining his new team he tore his Achilles tendon during practice and never played for New Orleans.

Bryant has 7,459 receiving yards and 73 touchdowns in his career.