If You Want To Make Money On Daily Fantasy Sports This Sunday, Put These Guys In Your Lineup 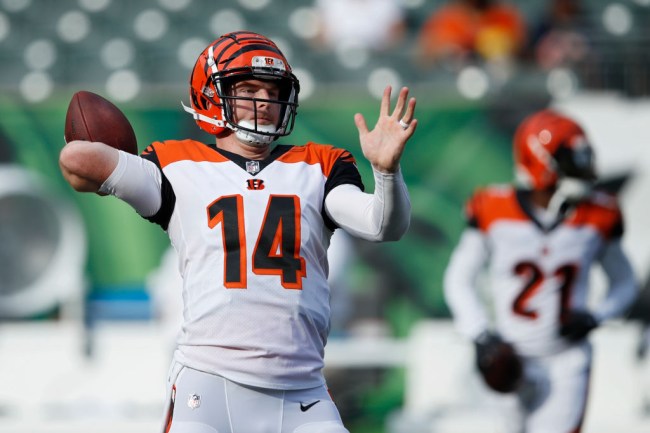 ***Editor’s Note: With the NFL season underway, we decided to bring on a Daily Fantasy Football juggernaut to help you bros with gain a unique perspective and strategy that can help you dominate your leagues. Kevin Dudzinki is ranked in the top 5% of all DFS players, according to Rotogrinders.com, and has made a killing on fantasy since he started in 2013. Learn more about Kev HERE and follow him on Twitter HERE.***

The wait is over, and football is finally here. Let’s take a look at the players who are going to make us some money this weekend.

The Colts/Bengals game has the third highest over under on the board, and a tight spread. Last year in this exact matchup, Dalton finished as the third highest scoring QB on the week. This year, the Colts defense looks to be even worse, with their secondary and their pass rush as the primary concerns. We all know Dalton has AJ Green to rely on, but now he adds former 1st round pick John Ross and his blazing speed, and a healthy Tyler Eifert. All of these things add up to what should be a very productive fantasy day for The Red Rifle.

Many casual players are going to look at Keenum and immediately dismiss him because he is playing the Seahawks. But the Legion of Boom isn’t what it used to be. Richard Sherman is gone, and Earl Thomas only reported to the team yesterday, so we don’t even know if he is going to play and how effective he can be. Keenum had a magical year last year with the Vikings, and while I expect him to regress a little bit, I do think he can pick apart the Seahawks this week. He should be able to provide you with a solid amount of fantasy points for his cheap price, allowing you to spend up at other positions.

If you have a little extra room in your salary cap, consider spending up for Phillip Rivers. In what should be an offensive explosion, Rivers is my favorite QB of the week. The Chiefs passing defense is going to be one of the worst in the league, and there is a chance starting All-Pro safety Eric Berry will not play. Facing a Kansas City defense that is starting three cornerbacks who are used to playing in the slot and not versus outside receivers, Rivers and company should have a field day.

Assuming LeVeon Bell is not playing, James Conner is the absolute chalk of the week. If you are playing cash games, put him in your lineup, don’t think twice about it. In 50/50 contests James Conner will be owned by about 90% of the field. Now in the massive tournaments, there is a case to be made for fading Conner. I would be surprised if Conner’s ownership doesn’t approach 50% in some tournaments. With that being said, Conner is an extremely strong play. He has a great price, and we have seen what Deangelo Williams has done in the past when LeVeon Bell was out with an injury. Conner should be in line for at least 18 touches, and should easily pay off his salary.

Kamara is my favorite pay up at any position this week. An explosive playmaker, who can take any play to the end zone, Kamara has so many things working in his favor this week. First, the Saints are the heaviest favorites of the weekend, making it very likely they have an extremely positive game script. Second, Mark Ingram is suspended for 4 games, and the only other running back on the roster right now is the recently signed Mike Gillislee. This puts Kamara in line for about 18-20 touches, and against a putrid defense like Tampa Bay, Kamara should explode.

Cole is the newly crowned starting wide out in Jacksonville, after Marquis Lee tore his ACL in the preseason. Cole should be peppered with targets against the Giants, and for such a cheap price, he should be able to pay it off fairly easily. I expect around 8 targets for Cole on Sunday, making him useful at his price, and allowing us to afford players like Alvin Kamara. Cole will be chalky though, probably approaching 20% owned in tournaments. If you wanted to gain leverage on the field, you may want to consider either Dede Westbrook or Donte Moncrief, as their ownership should come in at a fraction of Cole’s and one big play by either of them, could have you outscoring all the Cole owners.

With Julian Edelman suspended, Chris Hogan is easily the top wide out for the Patriots. Hogan is Tom Brady’s favorite red zone target, even more so than Gronk, and should gain an even higher market share of targets with Edelman out. The Texans were poor against slot receivers last night, and Hogan operates out of the slot about 45% of the time, making him a great play this week.

Keenan Allen $7,500
For all the above reasons we mentioned above about Phillip Rivers, are the same reasons we should love his top target, Keenan Allen. Allen is a points per reception monster, and should have a field day against the Kansas City secondary.

At tight end, Rob Gronkowski is an excellent play if you have the cap space to spend up. If you are looking for some salary relief, Jack Doyle on the Colts should be one of Andrew Luck’s go to receivers, and a very popular play. If you are looking for some pivots off the popular Doyle, Austin Sefarian-Jenkins is facing the Giants, who are notorious for getting blown up by tight ends. Ricky Seals-Jones of Arizona is also an intriguing play, as he was extremely efficient last year in a back-up role, and is now the starter in Arizona.

At defense, the mega chalk will be the Baltimore Ravens. Facing a quarterback making his second career start in Nathan Petermann, the Ravens should have a field day. In his first start last year, Petermann threw 5 interceptions in the first half against the Chargers, and was benched at half time. While I don’t foresee that happening again, expecting Petermann to have a good game is not likely. They are the most expensive defense however, but it is easy to afford their price tag with so many good cheap options at other positions. Other defenses to consider include, the Saints as the highest favorite of the week, and the Bengals against a shoddy offensive line in Indianapolis.