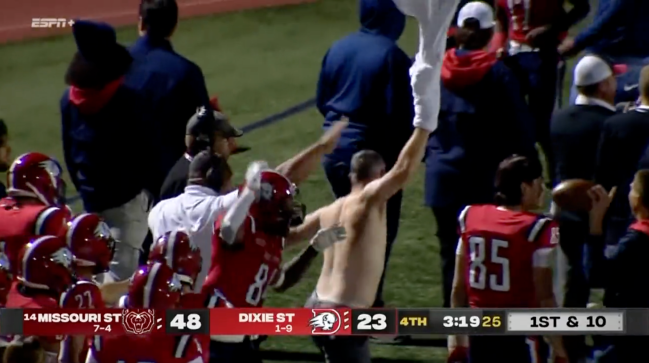 Dixie State football, soon to be Utah Tech, is not very good. The Trailblazers are 1-8 this season, but head coach Paul Peterson isn’t going to let that stop him from having some fun.

Peterson, who is undeniably a players coach, was hired in 2018 and his current extension runs through 2025. Whether the results on the field begin to come or not, he has built a program that wants to play for him.

Ahead of Saturday’s game against No. 14-ranked Missouri State, Peterson made a promise to his team. The defense, which has struggled greatly throughout the season, needed some motivation.

In turn, Peterson promised to take his shirt off if his team returned an interception for a touchdown. Sure enough, late in the fourth quarter with the game out of reach, the Trailblazers defense took one back.

Freshman cornerback Devyn Perkins stepped in front of a deep ball at his own 5-yard-line and ran it back 95 yards TO. THE. HOUSE!

As soon as he crossed the goal line, Peterson quickly began to scramble. He ripped off his headset, reached under his sweater and pulled his collared (probably button-up) shirt over his head.

Shirtless, Peterson ran down the sideline swinging his shirt and sweater in his hand like a madman in sub-40 degree weather. All while being down by more than 21.

While celebrating a touchdown to cut the score to 25 is strange, regardless of the circumstance, Peterson kept his promise and it was awesome. Why would you not want to play for a coach like that?!