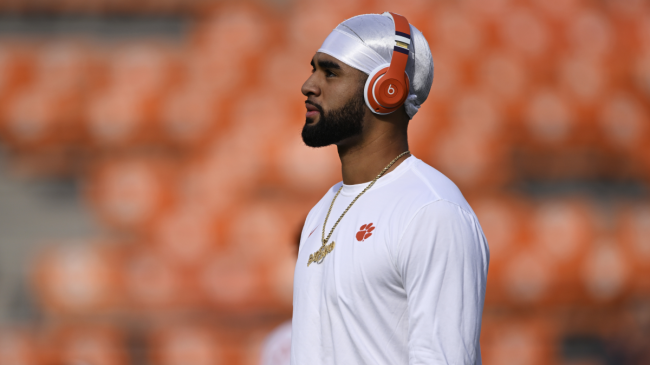 DJ Uiagalelei’s grandmom was the target of some online hate during Clemson’s most recent loss to South Carolina. The quarterback’s struggles led to some backlash for his family member.

Now, things can often get out of hand when talking about college football fanbases, particularly during rivalry week. Tensions can be even higher at a program that’s been on top, like Clemson, that’s hit a bit of a lull following a run of unprecedented success.

After landing a pair of national titles last decade, the Tigers have come back down to earth a bit. While they continue to run through the ACC, the College Football Playoff has been out of the equation the last couple of seasons. Their slight CFP hopes in 2022 were crushed in their season-ending defeat to the Gamecocks.

Much of the blame has been put on the shoulders of quarterback DJ Uiagalelei, who’s attempting to follow in the footsteps of the best passers in program history, Deshaun Watson and Trevor Lawrence.

Uiagalelei has struggled in 2022, a trend that’s continued from his 2021 campaign. That’s been frustrating for Tiger fans who believed he’d be the next great Clemson signal caller after seeing his production as a freshman. Those frustrations came to a head on Saturday after the Tigers fell to their archrival South Carolina for the first time since 2013.

And as is the case with the rise of social media, those angry fans became keyboard warriors after seeing their team lose at home for the first time in 40 games.

Now, Uiagalelei certainly deserved some of that criticism as he recorded just 99 passing yards while completing 27% of his throws. It was the second straight season that the Gamecocks held the passer to under 100 yards, and the lack of an aerial attack this year doomed the Tigers in the 31-30 defeat.

Clemson could only muster 86 second half yards against a defense that’s been gashed with injury and had allowed at least 27 points in three straight contests. After jumping out to a 23-14 lead, the Tigers saw the two-score advantage erased with South Carolina taking its first lead in the fourth quarter.

That led many to call for backup quarterback Cade Klubnik to enter the game, though head coach Dabo Swinney never pulled the trigger on a change under center. With DJ Uiagalelei continuing to take snaps and continuing to come out empty handed drive after drive, Clemson fans started to slam the QB online.

DJ Uiagalelei’s grandma wound up catching some strays on Facebook amid that bashing.

As any loving grandmother would do, Fofoa Uiagalelei wished her grandson good luck ahead of Saturday’s matchup with a message on Facebook.

The Clemson media team posted a graphic of their quarterback online to preview the South Carolina matchup, to which Uiagalelei’s grandmom commented the following.

“My amazing and very humble grandson DJ, we love you! God be with you all the time.”

The well wishes were unfortunately met with vitriol.

Not going after the grandma now 🥴

This person wrote, “I’d be humble, too, if I weren’t any good,” while others told him to transfer. Again, all of these replies were in direct response to Fofoa Uiagalelei’s original comment.

Clemson fans might get their wish this offseason as transfer rumors have already begun to swirl. If so, hopefully DJ’s next program will keep the grandparents out of the crosshairs.