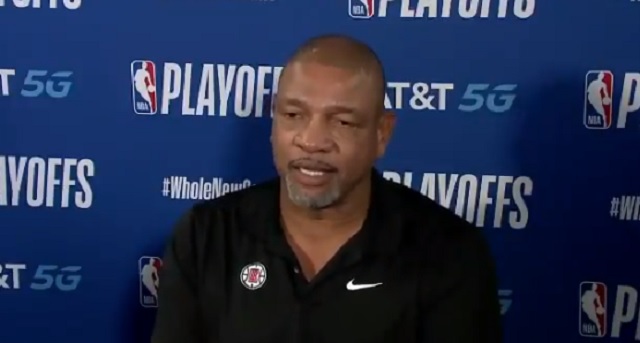 The LA Clippers took a commanding 3-2 series lead on Tuesday night but Doc Rivers wasn’t in a jovial mood after the game..

While speaking to the media in the team’s postgame press conference, Rivers was extremely emotional while talking about the Republican National Convention, the police shooting of Jacob Blake, and why this country needs police reform.

How dare the Republicans talk about fear we’re the ones that need to be scared, we’re the ones having to talk to our sons, what white father has to give his son a talk about being careful if you get pulled over?

Doc’s comments come on the same day several NBA players including Marcus Smart, Fred VanVleet and Norman Powell have talked about potentially boycotting playoff games in the aftermath of 29-year-old black man Jacob Blake being shot seven times by police as he entered his car where his children were in.

Fred VanVleet: "I was pretty excited and then we all had to watch Jacob Blake get shot yesterday. That changes the tone of things…It's just starting to feel like everything we're doing is just going through the motions, nothing's changing."

Powell: "Taking a knee for the anthem, that's not getting the job done. That's getting washed out…Something has to happen where you're forcing those people who can make the change to do something."

Asked about boycott, says a lot of things have been talked about.

Marcus Smart was asked if thinks a potential boycott is warranted to get the players heard: "Definitely. Something has to be done, and right now our focus should not be on basketball."

It’s still unclear if players will follow-through with the boycott but the mood inside the bubble is currently grim.

Personal observation: Players are visibly shattered the last 48 hours. Many believed coming down to Orlando, using the platform would inspire change. See what happened in Wisconsin — it’s made many wonder if it was worth it.