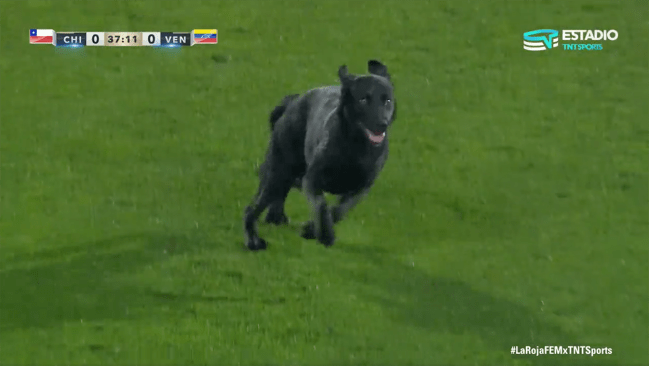 An international women’s soccer friendly between Venezuela and Chile was interrupted by a streaker on Saturday. But it wasn’t a person, it was an adorable dog who just wanted some extra love.

Play came to halt for a throw-in during the 37th minute, and it quickly became a longer break than intended. On the near side, a dog had run onto the pitch and made friends with the Chilean goalkeeper, rolling onto its back and demanding a belly rub.

After getting plenty of love from the keeper, the dog hopped back to its feet, ran over to the referee and flipped back over onto its back. She proceeded to give the playful dog some more love before a Chilean defender and a staff member tried to get the dog to follow them off of the pitch.

Instead, the dog went sprinting past half field before turning and running toward the huddles that had formed on the sideline. It wanted more belly rubs and got its wish before eventually getting carried off.

The entire thing was adorable. Although it disrupted the match, it was only a Copa América Femenina tune-up, so the dog ended up being the highlight of the night.

Take a look at the very good pitch invader who deserves all of the boops:

Interestingly enough, this was not the first time that a Venezuelan soccer match was interrupted by a pup. It also happened back in 2016 during a club match.

Streakers are unwelcome. Pups are always welcome, even if it causes an interruption.