Surfer Gets Totally Body Slammed By A Dolphin, Is Absolutely Stoked About It 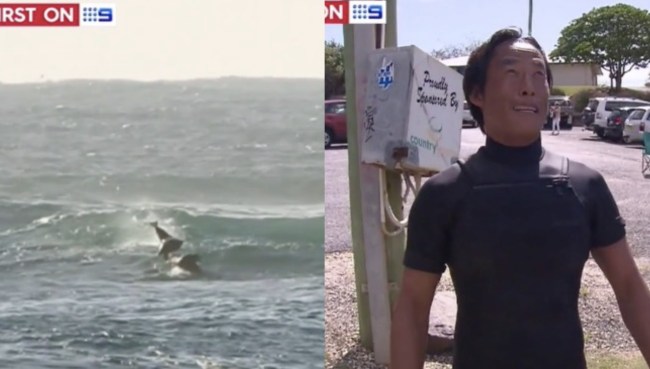 To this surfer who got body slammed by a dolphin while riding a wave, this wasn’t a catastrophic event. In fact, he was beyond stoked to have had the dolphin barrel into him and cause a wipeout.

Some people would be rattled by a crash like that, but this bro gave an interview afterward with 9 News Gold Coast and it’s a clip which has instantly gone viral:

Here’s a Vid.me version of that clip just in case the 9 News Gold Coast Facebook embed isn’t loading for some of you:

“I looked up and thought, ‘Fuck this, there’s no way I can get away from this.’”…This man is awesome. Over on The Huffington Post they’re saying this man’s an Australian Gold Coast surfer, but I’m skeptical.

I can clearly hear a Hawaiian accent coming out of this dude’s mouth. Yes, this incident definitely took place while he was surfing Australia’s Gold Coast, but I’m not convinced that he’s actually Australian…What do you bros think? Hawaiian, right?