Stephen A. Smith And Max Kellerman Are NOT Fans Of Tiger Woods’ Comments About Donald Trump 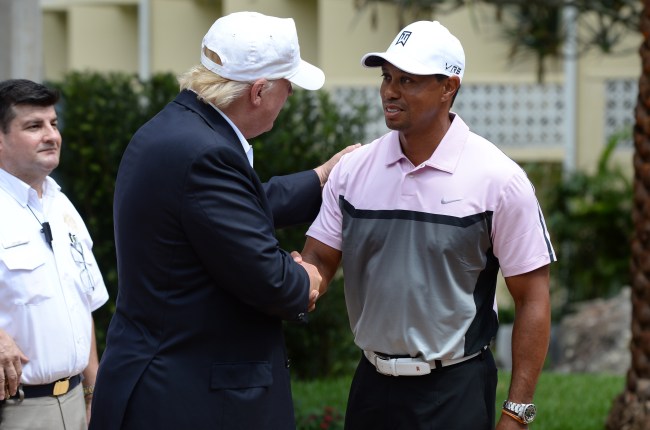 As you may or may not have heard by now, Donald Trump has been a bit of a divisive figure over the past few years— especially in the world of sports.

Trump has been at the center of an impressive amount of sports drama since taking office, such as the time he decided to “uninvite” the Warriors from visiting the White House after they decided they’d rather do literally anything else— a move that inspired LeBron James to post a tweet that made it very clear about how he feels about the president.

Based on a tweet from Trump earlier this month, it appears the feeling is mutual.

Lebron James was just interviewed by the dumbest man on television, Don Lemon. He made Lebron look smart, which isn’t easy to do. I like Mike!

Once routine visits to Washington, D.C. have become increasingly political and Trump has helped stoke the fire with his comments criticizing NFL players protesting during the national anthem, including the time he called them “sons of bitches” in a move I’m guessing didn’t exactly thrill too many people in the league.

Thanks to Tiger Woods, we now have a brand new controversy on our hands after he was asked about his relationship with Trump and how he feels about him being at the helm of the country.

After a reporter asked Tiger if his racial background has any effect on how he views Trump (who he admits is a longtime friend), he replied by saying:

As you’d probably come to expect by this point, people have some opinions about Tiger’s take— including Trump himself.

The Fake News Media worked hard to get Tiger Woods to say something that he didn’t want to say. Tiger wouldn’t play the game – he is very smart. More importantly, he is playing great golf again!

A number of people have sounded off concerning how they feel about the comment and today Stephen A. Smith and Max Kellerman weighed in on the topic because we’ve reached a point where it’s basically impossible to just “stick to sports.”

I think it’s safe to say that they are not fans of Tiger’s response.

“It really bothers me. I’m angry at what Tiger Woods said. It is a thoughtless statement held up as a thoughtful statement and it either holds in contempt the intelligence of the people who hear it. Or else it’s just a stupid thing to say.”

I assume this will be the end of the discussion and no one else will have any thoughts on the matter whatsoever.