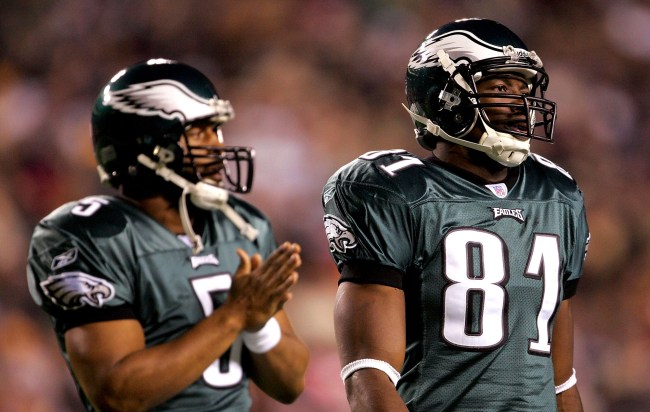 The Eagles had been to the NFC Championship Game three times previous only to come up short in all three games. The team seemed poised for another run, despite losing Super Bowl XXXIX 24–21 to the New England Patriots.

McNabb threw three tough interceptions in that game, which could be argued were the difference.

Owens, meanwhile, still recovering from a fractured fibula that required two screws and a metal plate to repair, managed to haul in 9 receptions for 122 yards.

During the following April, Owens famously held a press conference on his driveway and conducted a public workout while bemoaning his contract and saying in a thinly-veiled jab at McNabb, he “wasn’t the guy who got tired in the Super Bowl.” (McNabb allegedly vomited in the huddle during the Super Bowl.)

For years since, Owens has taken direct and indirect shots at McNabb, while Donovan has remained mostly quiet.

McNabb was a guest on the latest episode of “Untold Stories” and revealed that he blames Owens for breaking up the Eagles and kept them from returning to the Super Bowl.

“The lead-in to the following year I’m thinking he’ll be back healthy, you know? We had Free, we had guys that were just elevating their game, gaining experience, we’re going to be back,” said McNabb. “So, the off season goes through and all of the sudden there’s turmoil here there are conversations going back and forth and we had to answer those questions instead of focusing on what we need to do in order to get back to where we were and I thought that was the major distraction for us.

“I’m just sitting there, I’m watching on TV and Brian Dawkins and Trotter were my roomates,” added McNabb. “And Dawk comes in and he’s like ‘What did he do now?’ and I’m like ‘Take a look.’ Like, this is like Days of Our Lives. Like, it’s unbelievable, you know. That was something that kind of broke us up. That was the most frustrating thing for me.”

McNabb continued to disuss what happened and eventually tried to make nice by saying, “What was in the past is in the past. You know, he’s made a few comments as of late… that’s cool with me. Listen, I’m a grown man I handle grown man business.”