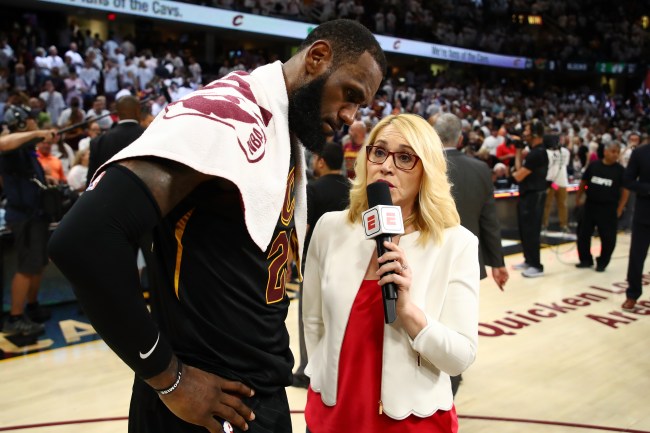 Beloved ESPN and ABC broadcaster Doris Burke has been a renaissance woman in the field of broadcasting and color commentary for decades. The 52-year-old was the first woman to announce a Big East men’s basketball game on TV, the first woman to do a New York Knicks game on TV or radio, the first woman to be a full-time NBA analyst on national television, according to NJ.com. On Thursday, her talents will be in full display during Game 1 of the NBA Finals on ABC.

Jeff Van Gundy called her “the LeBron James of sportscasters,” so it’s only a matter of time before Skip Bayless presents the Burke vs. Jordan comparison and argues it for twenty minutes.

But before Burke was a Hall of Famer, she was a Jersey girl and youngest of eight in a gritty, blue collar Irish-Catholic family.

Burke, who then held the last name Sable, credited her rough-and-tumble upbringing as the reason she earned the starting point guard position on Manasquan High School girls varsity team as a freshman. Before graduating in 1983, the 5’6” Burke would become the school’s all-time leading scorer and the best player head coach Dick Johnson coached in 25 years. She would earn a scholarship from Providence College and become an All-Big East player.

NJ.com brought to light this incredible highlight reel of Burke in high school and she is ferocious. So is that hair.

Savage. I don’t know if I’ll ever be able to look at Doris Burke the same.

Before Doris Burke was the beloved broadcaster we know her as