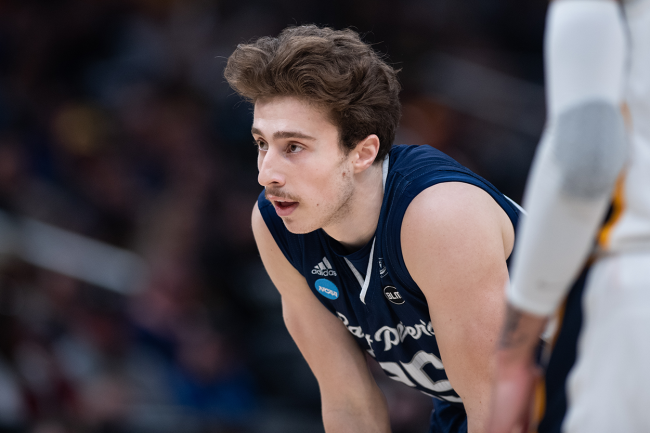 Saint Peter’s basketball is the greatest Cinderella team of all-time. After beating 3-seed Purdue on Friday, the Peacocks are the first-ever 15-seed to reach the Elite Eight.

At the forefront of the historic run is Doug Edert. This year’s March Madness star broke onto the scene by dropping 20 points against Kentucky in the first round.

While his scoring is one thing — he dropped 13 against Murray State and 10 against Purdue — it is Edert’s mustache and hair that have taken the country, and the world, by storm.

The origin story of Edert’s mustache only makes his legend even larger and he has since signed an NIL deal with Buffalo Wild Wings, which resulted in an electric promotional photo. Although it has been a recent run of success that has Edert in headlines, he has always been a bucket.

As a four-year varsity player for Bergen Catholic High School in New Jersey, Edert’s mixtape is so perfectly unconventional. Not only was he knocking down triples but, just like he has during this incredible run, he simply found a way to score. It might not always have been the prettiest, but it was always the grittiest and Edert didn’t miss.

High school highlights of the March Madness standout have gone viral as his college continues to win, and it’s a joy to watch. Edert is a grinder who works hard for every point and can shoot the lights out if you give him space, as Kentucky learned last weekend.

Take a look at the younger-version of the Saint Peter’s great in action:

🚨ST.PETER'S IS HEADED TO THE ELITE 8🚨

Before Doug Edert became a household name he was getting 🪣 🪣 as a four year varsity player for Bergen Catholic High School 💪🏼 #MarchMadness @DougEdert2 @BCCrusaderHoops @PeacocksMBB @NJHoopRecruitpic.twitter.com/gsPyUga0Mz

After taking down the Boilermakers, Edert and the Peacocks will turn their focus to North Carolina with a historic, monumental, hard-to-believe Final Four birth on the line.