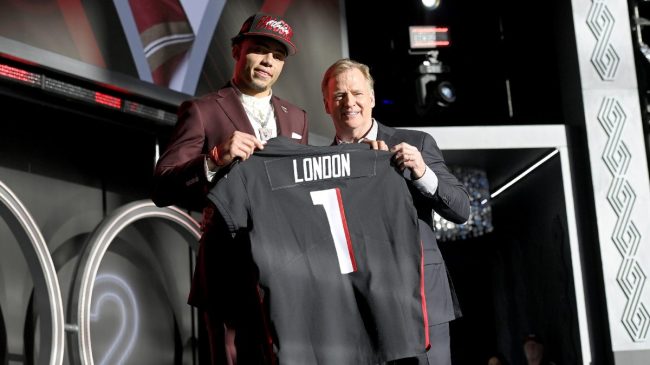 The NFL Draft is underway with the first round of action kicking off on Thursday night.

The event provides drama and excitement as teams choose their faces of the future, but it also gives viewers an opportunity to wager on when and where each player will go. And with this year’s draft taking place in Las Vegas, that rings even truer.

Rap star Drake is one who’s getting in on the action, as he placed a massive bet on one particular wideout.

Drake is widely known to dabble in sports betting. He’s placed major plays on both college basketball and the NBA in the past, though he lost a ton on the most recent Final Four.

He’s partnered with Stake, an online betting platform, and often displays the wagers he makes on the site. Thursday was no different.

The superstar placed a $100,000 wager on another Drake, wide receiver Drake London out of Southern California.

Drake bet that USC wideout London Drake would be the first receiver off the board in the 2022 NFL Draft. When the pass catcher was selected eighth by the Atlanta Falcons, the rapper cashed in.

Drake London comments on the bet

The USC product was asked about the wager prior to the draft. Here’s what he had to say.

“I think it’s really cool for a guy of his caliber to even know who I am. We share the same name. Hopefully one day I can meet him. And hopefully the bet does go through.”

That bet did cash, and it’s safe to say that both Drakes are happy campers on the NFL Draft’s opening night.