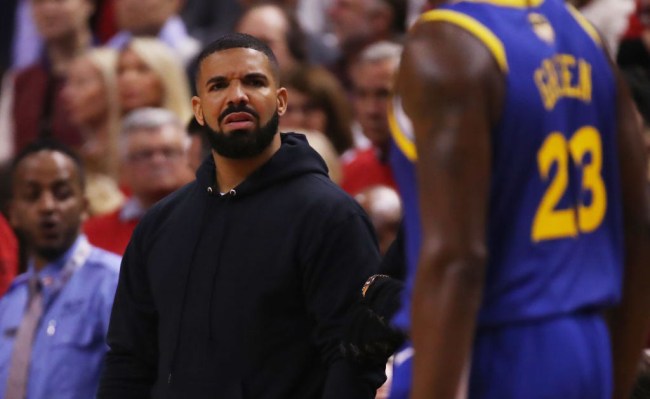 Over the weekend, the Drake curse reared its ugly head yet again after Anthony Joshua lost to the Large Adult Son who is Andy Ruiz Jr. after posting a picture promising he wouldn’t fall victim to the jinx.

While seemingly everything Drake roots for has a tendency to turn dodo, there’s one team that’s largely managed to avoid his bad juju: the Toronto Raptors, who headed into Sunday night sporting a 1-0 lead over the Golden State Warriors in the NBA Finals.

During the first game of the series, Drake—who’s been trolling opposing teams as much as possible this postseason—rolled up to the arena sporting an autographed Dell Curry jersey to take aim at Steph.

There was little doubt Drake was going to pull some shenanigans last night and he did not disappoint, as he arrived at the game rocking a hoodie featuring a picture of Macaulay Culkin from Home Alone, which was clearly a shot at Kevin Durant, who has been absent for a few games while nursing an injury.

It didn’t take long for Drake’s sweatshirt to start to make the rounds and it apparently caught the attention of the actor (and member of a pizza cover band), who issued a fantastic response.

Unfortunately for Drake, his trolling couldn’t stop the Warriors from going on an 18-0 run after the Raptors were held scoreless for almost seven minutes and Durant and Klay Thompson both took him to task after the game.

I can’t wait to see what outfits he has in store for the rest of the series.