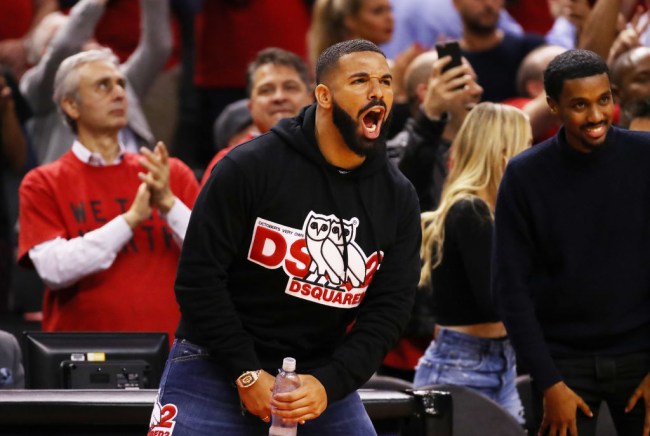 Drake gets a lot of flack for being the ultimate bandwagon fan and any team who suddenly counts him as a supporter should be very wary based on his history of cursing the squads and people he throws his support behind.

Last month, the Drake Curse struck again when the Torontonian donned a Maple Leafs sweater and struck fear into the heart of Raptors fans who were understandably worried it was only a matter of time until the rapper turned his attention to dooming their playoff hopes.

Thankfully, it appears Drake has figured out a way to weaponize his bad juju and use his powers for good instead of evil, and as a result, the Raptors are still in championship contention after evening up their Eastern Conference Finals series with the Bucks at 2-2 following a 120-102 victory last night.

Drake was a loud and proud spectator during the third game of the series and was just as present on Tuesday after being presented with a $769,000 custom jacket prior to the game.

However, things got a little weird in the fourth quarter when he decided Raptors coach Nick Nurse looked a little stressed and opted to help him out by giving him an unsolicited shoulder rub.

Ok, Drake is out of control 😂 pic.twitter.com/kyKfp1gJ0X

How security was looking at Drake when he went to grab Nick Nurse pic.twitter.com/RV8XNe4XDH

Nick Nurse didn’t even notice. Time to just him as assistant coach/hype man and be done with it. pic.twitter.com/zDcTpOHzUu

Drake touching Nick Nurse is the reason I hate Drake.

I’m convinced he’s an assistant coach at this point.