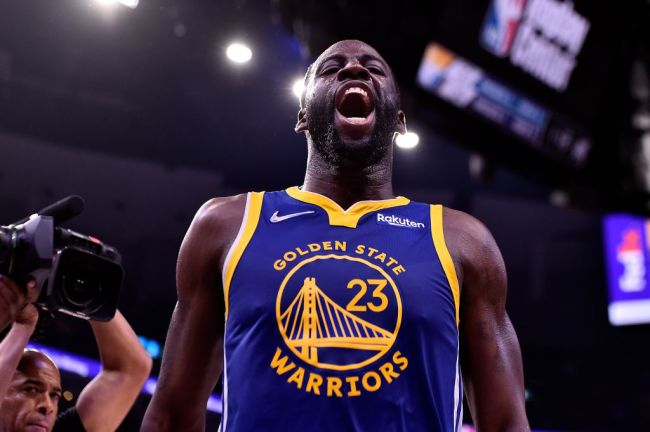 Things got ugly last night when the Golden State Warriors and Memphis Grizzlies for Game 2 of their 2nd round series. It took less than 3 minutes for there to be an ejection after Dillon Brooks fouled Gary Payton II, causing Payton to fracture his elbow.

Shortly after the Payton injury, Draymond Green was also forced to head to the locker room. Green had been bloodied by a Xavier Tillman elbow to the face.

On his way off the court, Green was booed by Grizzlies fans. Green was not thrilled with this reaction from the home fans and decided to flip the crowd off.

Draymond with a message on his way to the locker room. pic.twitter.com/ftIvSS00JE

This isn’t the first time we’ve seen the double birds during this season’s playoffs. Kyrie Irving flipped off Boston Celtics fans during round 1 of the playoffs, albeit more discreetly. Kyrie was fined $50K for his actions.

Green is well aware of that precedent, but doesn’t seem particularly worried about the league reaching into his wallet.

“If you’re going to boo somebody who got elbowed in the eye and had blood running down their face, you should get flipped off. So, I’ll take the fine. I’ll go do an appearance and make up the money.”

Green is no stranger to disciplinary actions from the league. He was already hit with a $25K fine this season for cursing at an official back in March. He has also earned a $50k fine for tampering with Devin Booker. There have also been quite a few fines throughout his career for the numerous technical fouls he has earned.

Don’t be surprised if this isn’t the last fine Draymond has to pay by the end of the series.