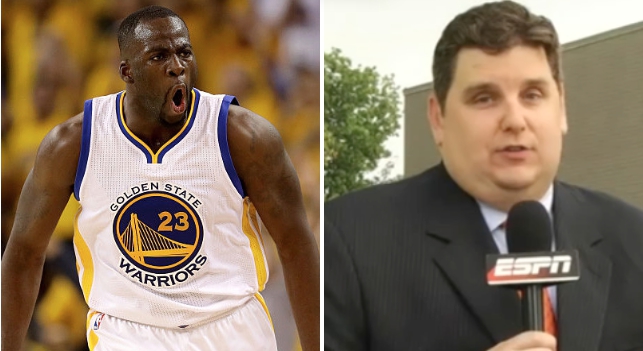 Over his five year NBA career, Draymond Green has become a master at surgically removing his opponents’ souls and spirits with a spoken word. Like when Mavs rookie Dennis Smith Jr. tried to dunk on him and Draymond got in his face and said, “You ain’t never gonna dunk on me. You’re a boy.” Or when Mavs undrafted rookie Gian Clavell entered the game during garbage time, Green repeatedly yelled “Hey, who is this?” Or when he told Paul Pierce during the twilight of his career, “You can’t get no farewell tour! They don’t love you like that! You ain’t Kobe!”

Morale of the story: Draymond will recognize your insecurities, expose them, and have you thinking about it in the shower 10 years later.

Windhorst appeared on the NBA Countdown panel, and he brought up Green’s comments from a couple weeks back when he said the NBA needs a new batch of officials. His words exactly: “Guys, Draymond Green said every referee should be fired.”

The clip Dray is talking about. pic.twitter.com/okbvHNb9I2

Draymond Green caught wind of Windhort’s comments and decided to neck shame him to his 1.12 million Twitter followers.

Don’t bring my name up No neck. I’m not the topic of y’all conversation today.

The irony in this is that Windhorst was on KD and the Warriors’ side when he was making his point about the officials. Imagine how hard Draymond would have went after him if he actually insulted him.

Upon hearing Draymond’s jab, Windhorst was a good sport about it. Shortly after, Paul Pierce said Paul George was more deserving than Green, to which Windhorst joked, “Now Draymond’s going to tweet at you.”

No word on whether or not Windhorst was crying backstage or not. Story still developing.