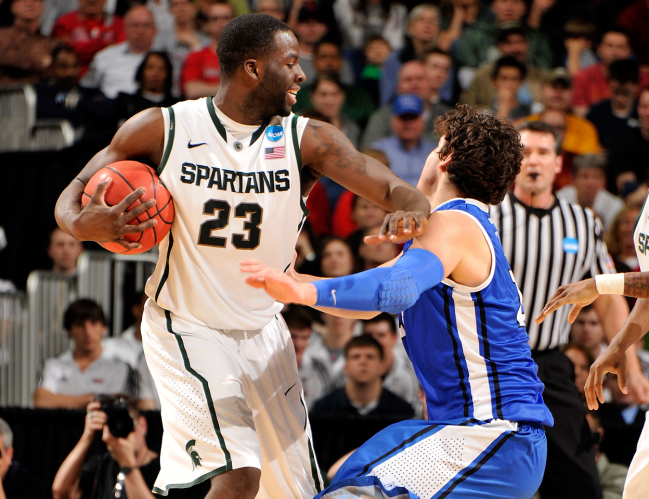 Draymond Green’s time at Michigan State was rather dominant. The Golden State Warriors power forward played four years for the Spartans and finished his college career as one of the best players in school history.

By the time Green left East Lansing, he had been named the Big Ten Player of the Year and a Consensus First-Team All-American as a senior. He has since had his number retired by the school.

During an appearance on The Herd with Colin Cowherd, Izzo spoke candidly about the NCAA Finals and his former players. He was surprisingly honest on his outlook for Green while he was still at Michigan State.

When asked if he had envisioned Green becoming the star that he is, Izzo said the following:

“No, no, no. You know, he’s been a lot better than I thought he would be. I thought he’d be a very good player. But I think his basketball IQ and maybe the system that he’s in … I think Steve Kerr, Bob Myer (and) those guys have done a great job with Draymond and I think Steph (Curry) and Klay (Thompson), I mean, that group has been together, unlike college now, where we seem to have ‘transfer central.’ If you look at Golden State, they’ve got guys that have been there seven, eight, nine, 10 years including the coach, the general manager, so they’ve been different than most franchises. They’ve kept everybody pretty much together.”

In addition, Izzo spoke about how he handled Green as a player in college. The Warriors All-Star is a very big personality with a lot of character. He never shies away from speaking his mind and plays with full-throttle passion on the court— even when that might not be in his best interest.

Izzoe said that Green gets less credit than he deserves for his intelligence.

“There were some days, there were some timeouts that were really interesting. Those huddles were legendary. You know, players still talk about him. You have to be around him to appreciate him. And I say that with great respect. I mean, I told them out him, I think it was game, you know, one of the late games of the last series, I thought he let the officiating get to him and he agreed, you know? He’s very smart. Yes, he’s emotional, but he’s smarter than people give him credit for. Some of it is part of the schtick. It’s part of what he does, but I promise you winning is at the front of his radar. Winning is the most important thing to him and he’s a tough kid. He’s like a hockey guy. Somebody’s got to have a protector.”