New Video Shows Draymond Green Refusing To Shake Hands With Tristan Thompson After Sweep: ‘I Don’t F*ck With You’ 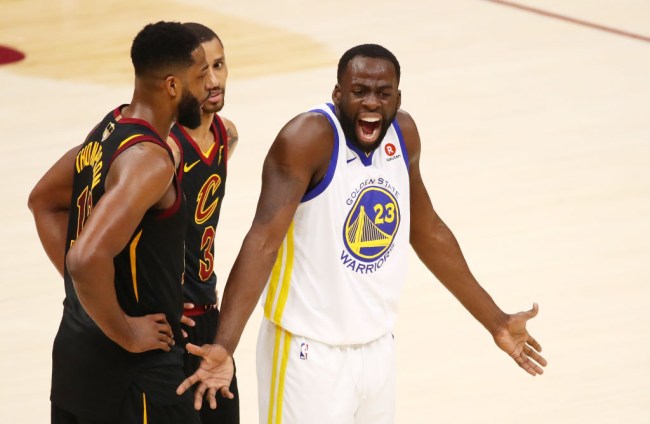 Tristan Thompson and Draymond Green got along just about as well as Doug Funny and Roger Klotz during the NBA Finals, with Dray playing the role as Roger and Tristan taking the role as Doug, a man who is perpetually distracted by a woman and who never seemed to get to Quailman level during the four game series.

During Game 1, Thompson shoved the ball into Draymond’s face, earning Thompson an ejected. One would think that after the Warriors handily swept the inferior Cavs, Dray would be completely validated and his on-court beef with Thompson would end at the final whistle.

A newly surfaced video shows the Cavs forward attempting to shake Draymond’s hand after getting swept on his home court. Draymond not only refused to shake Thompson’s hand, but also said point blank: “I don’t fuck with you.”

“I don’t fuck with you”… Dray to TT after the Finals Sweep… @Sixfever pic.twitter.com/ald7LkRckz

Fast forward to yesterday’s championship parade in the Bay Area. Green kept the jabs going while talking to a reporter: ‘I told one of them dudes from the Cavs, he tried to shake my hand, I said ‘Tristan, we ain’t cut the same.’

"A lot of guys in this league is soft…I told one of them dudes from the Cavs after the game, he tried to shake my hand, I said, 'Tristan, we ain't cut the same.'" – Draymond Green.

Thoughts and prayers to Tristan Thompson in these trying times.