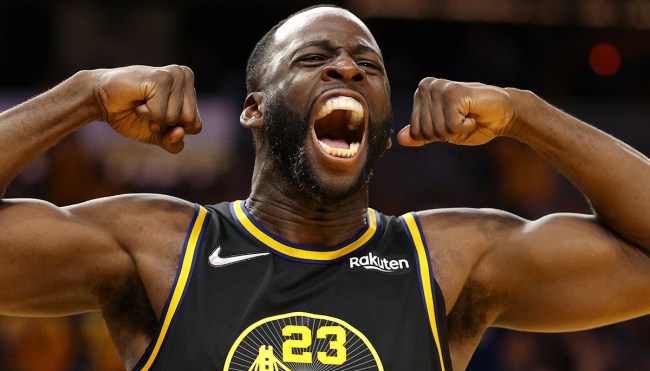 On Wednesday night, the Celtics pulled out to a 2-1 lead in their NBA Finals showdown with the Warriors after holding off Golden State’s third-quarter push and outscoring their foes 23-11 in the final 12 minutes en route to a 116-110 victory.

It was a fairly rough showing for the Warriors as a whole, but it was an especially frustrating one for Draymond Green. He fouled out of the game with a little over four minutes to go and walked off the court boasting a stat line featuring a whopping two points, four rebounds, and three assists that were recorded over the course of 35 minutes he played on the hardwood.

No one was more elated about that development than the fans at TD Garden who showered the big man with the “F—k You Draymond” chant that was the subject of a laughable amount of scrutiny after Klay Thompson and Steve Kerr (among others) criticized the Celtics faithful for their truly unprecedented potty mouths while speaking with the media following the game.

Green was unsurprisingly dour during his postgame press conference, and he didn’t mince words when asked about his fairly abysmal performance.

Draymond Green kept it short when asked how he played tonight 😅 pic.twitter.com/YOckBp2dEf

He also wasn’t thrilled with a reporter who suggested he gave too much insight into Golden State’s game plan during one of his podcasts. While he didn’t seem to regret those comments, it’s hard to imagine he feels the same about another one that came back to bite him in a big way.

As Larry Brown Sports points out, Green addressed his similarly underwhelming performance in Game 1 last week and said, “I personally leave that game saying, ‘Hmmm, I won’t play as bad as I played again, which will affect our team in a positive way.”

It wasn’t too hard to imagine he’d be able to live up to that promise when you consider he only put up four points in that contest (along with 11 rebounds and five assists), but as we learned on Wednesday, that did not turn out to be the case.

That’s not the only one of Green’s prophecies that have aged poorly, as a Reddit user also noted he’s hit around 22% of his long-range attempts since asserting “it’s about the time of year when I start shooting 40% from three” back in April.