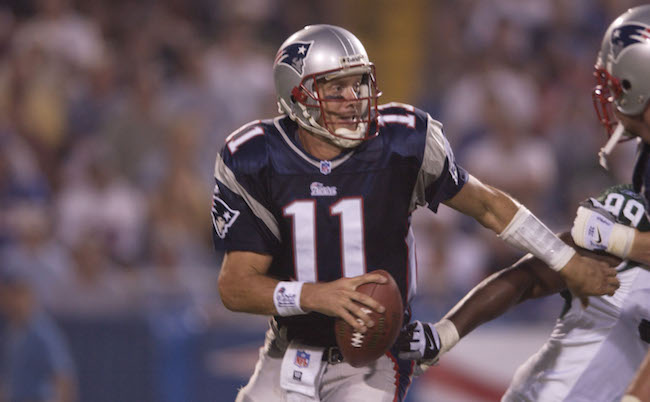 Nobody expected too much from the Boston Celtics heading into this year’s NBA playoffs. Plenty of people thought their season was essentially over after Gordon Hayward broke his leg before Kyrie Irving suffered a season-ending knee injury, but the team still manage to overcome the setbacks to finish the season second in the Eastern Conference thanks to a ragtag roster that keeps coming up with ways to win.

The Celtics earned the right to play LeBron James and the other Cavaliers when they beat the 76ers last night after taking on the Bucks in the first round. It was that series that sparked an unexpected bromance between Terry Rozier and former New England Patriots quarterback Drew Bledsoe after the Celtic followed in the proud NBA tradition of trolling with clothing when he donned a Bledsoe jersey in response to Eric Bledsoe’s ill-advised diss.

The man dubbed “Scary Terry” got the chance to meet up with Bledsoe before last night’s game, and based on comments Bledsoe made at a press conference, this could be the beginning of a beautiful relationship.

Bledsoe— who is wearing a shirt repping the winery he owns in Washington in the Instagram photo— eventually put on Rozier’s jersey and fielded a few questions after the game. He revealed his plans to fly Rozier out to the vineyard to collaborate on the only project that makes sense: a Rozier rosé.

WINE CRAFTER DREW BLEDSOE ANNOUNCES there is a Terry Rosè in the future pic.twitter.com/IL7oUoqDKS

If this is the start of a series, I’d suggest Bledsoe looks into a Carmelo Merlot for his next project.