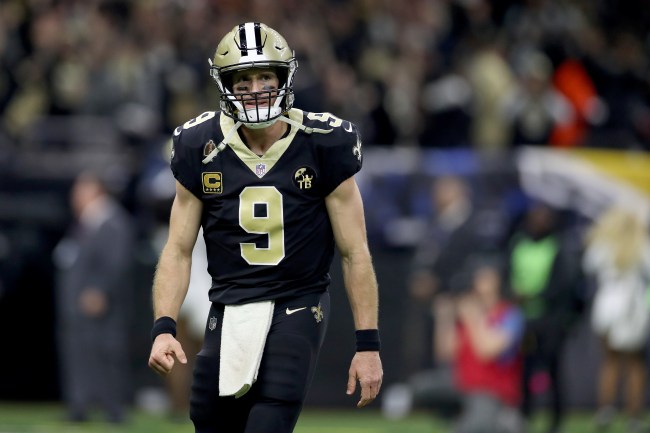 Drew Brees had every right to picket outside the NFL headquarters after the blown call heard round the world in the NFC Championship. If just one ref had done his job, the Saints would have almost certainly punched their ticket to just their second Super Bowl in their 52-year franchise history.

With Drew Brees turning 40 just a couple weeks back, you gotta wonder how many prime opportunities the former Super Bowl MVP will get. Brees’ knowledge of Father Time has to make his latest loss even more devastating, and I don’t think there’d be a football fan in America who would shame him for making a huge fucking stink about it.

But that’s not Drew Brees. The dude once again demonstrated why he is one of the most respected figures in all of sports with a heartfelt  Instagram message to Who Dat Nation.

I’ve spent this last week navigating the heartache and disappointment from the game. Some things within our control and some outside our control that caused us to fall short. So much of our motivation is to represent the Who Dat Nation with determination and resiliency. We want to play for you, fight for you, and win for you. You deserve that.

The longer I play I realize that we truly are one heartbeat with our fans. Our success is your success. Our disappointment is your disappointment. We are inspired by one another to accomplish things far greater than what we could ever do on our own.

Everything that has ever happened to this community, we have bonded together, galvanized and leaped forward every time.
The frustration we feel now can be channeled in the same way. Pour that passion and emotion into your families and communities. Inspire others with your focus & determination and positive outlook. This will make us stronger, this will bond us tighter, this will be a source for our success in the future.

So keep your chin up, hold your head high, puff your chest out because WE are the Who Dat Nation and WE will always persevere.

Absolutely amazing how there is zero hint of resentment, blame, or negativity in this message. I would be galvanizing the troops to go to war against Roger Goodell, and I know I’m in the majority. Turning negatives into positives and looking forward instead of in the rear view–if that ain’t leadership then someone punch me in the face. The refs won’t throw a flag, I promise.