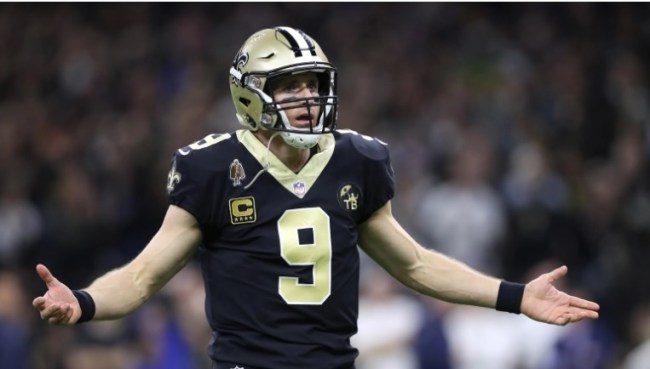 The Internet currently believes Drew Brees may be coming back for another season despite reports to the contrary.

After Brees lost to the Bucs in the playoffs it seemed pretty clear that he was going to retire this offseason.

.@JayGlazer says Drew Brees will retire after this season

He says this will be Brees' last game ever in the Superdome pic.twitter.com/R3T4dkWLY1

Even Saints head coach Sean Payton hinted at a retirement announcement coming in the near future.

There’s no reason to think Drew’s announcement will be anything other than a retirement announcement. That means the Saints will need to find a new quarterback.

Despite all the reports about his impending retirement, there’s a rumor going around social media that the aging QB is returning for one more season. It’s unclear where the rumor originated from but Brees is currently trending on Twitter because fans are mocking him.

Ah, Drew Brees is trending. I wonder what's going on?

*sees rumors that he might be coming back for another year*

**Michael Thomas beats his man on a double move deep**

The NFC South when they hear Drew Brees is coming back to the Saints: pic.twitter.com/s2oANR1UpI

The entire New Orleans Saints fan base when they see Drew Brees under center in week one. pic.twitter.com/FMdtII4gqJ

Jameis Winston when Drew Brees returns for another season as the Saints starting QB pic.twitter.com/h1veKj8ElG

Drew Brees: “I’m running it back with the Saints for another season”

The Buccaneers celebrating another year of Drew Brees on the Saints pic.twitter.com/rSD2Bud2wf

Drew Brees after throwing a 5-yard slant to Michael Thomas next season pic.twitter.com/U0wbkWvzmo

“When are you retiring”

Drew Brees running out of the tunnel for the Saints' 2021 season opener pic.twitter.com/VePtZQ2mPr