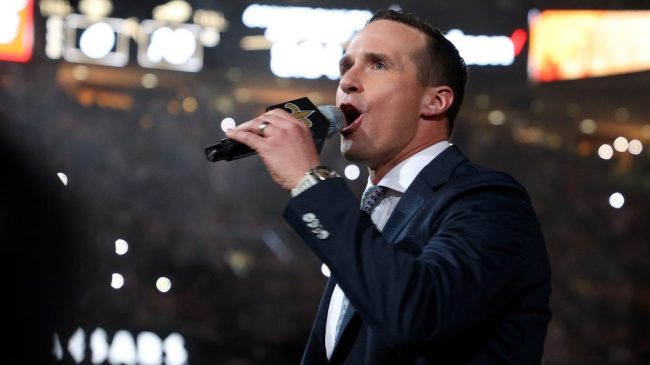 The Texas Longhorns are hosting the Alabama Crimson Tide for what may be the program’s biggest game in the last decade. It’s so big, even, that the Longhorns had to turn fans away at the gates of Darryl K. Royal Memorial Stadium.

Much of the hype surrounded Texas freshman quarterback Quinn Ewers. Ewers was the top overall recruit in the class of 2021. After first pledging to the Longhorns, he flipped to the Ohio State Buckeyes before transferring back to Texas in December of 2021.

Ewers lived up to the hype early on against the juggernaut Crimson Tide. He went 9-of-12 for 134 yards and had Texas tied 10-10 late in the first half before disaster struck.

With just 31 seconds left in the first quarterback, Alabama LB Dallas Turner hit Ewers and the freshman landed awkwardly on his shoulder. Ewers then left the game following the hit that many Texas fans are calling dirty.

Ewers was unable to return to the game. But future Hall of Fame quarterback Drew Brees believes that he should be ready to go in the second half.

Brees suggested that Ewers may have suffered a separation of the AC joint in his shoulder. If so, he suggests the Longhorns may be able to give him a cortisol injection at the half, put on a harness it, and get Ewers back into the contest for the second half.

He said rub some dirt on it

Some likened him to coach Bud Kilmer from the movie Varsity Blues.

Backup quarterback Hudson Card may make the decision easy for Texas coach Steve Sarkisian. Card went 4-of-6 for 59 yards in his cameo appearance. The Longhorns and Crimson Tide entered the half tied at 10-10.