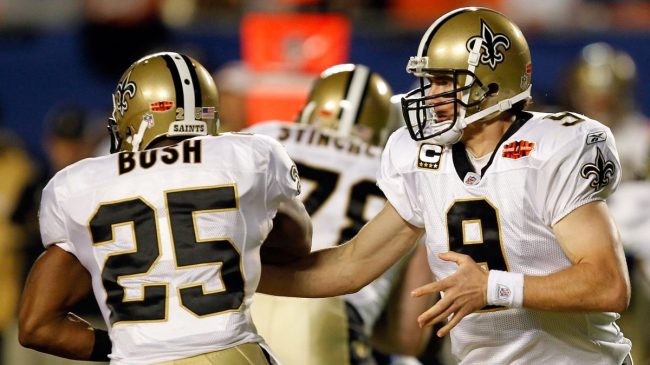 Drew Brees and Reggie Bush piloted one of the most dangerous offenses in all of football in the mid-to-late 2000s. The duo helped lead the Saints to a Super Bowl win in 2009 and Bush had the best years of his career in New Orleans.

But football fans will always remember one play in particular in Bush’s regular season. And it’s one that the former USC superstar doesn’t always like to bring up.

The Saints entered the 2006 playoffs as the No. 2 seed in the NFC. They went 10-6 in the regular season and won the NFC South. Bush was in the midst of a fantastic rookie year, while Brees put up MVP-caliber numbers to cement himself as one of the league’s best signal callers.

New Orleans took on the NFC East champion Philadelphia Eagles to begin their playoff run. Less than one minute into the game, this happened…

The memory of the hit never left Bush, understandably. Because when Brees joined him on the FOX pregame show ahead of Penn State’s win over Purdue on Thursday night, the two had a hilarious discussion about the hit.

This is the Drew Brees we want on 📺 damnit!!! pic.twitter.com/HQvOaojbZL

To his credit, Brees immediately explains what happened on the play. The future Hall of Fame QB says that the Eagles brought a corner blitz and Bush was the hot route. Except Brees didn’t see cornerback Sheldon Brown rotating down and Brown laid a huge hit on Bush.

Hilariously, Bush and Brees then discussed the Eagles running the same play later in the game. That time, Brees diagnosed it and picked Philadelphia apart for a big play. New Orleans won the game 27-24 before falling the Chicago Bears in the NFL Championship Game.

Fans absolutely loved the exchange between the two.

HECK YES, ok so Drew and Reggie Bush get a show ? https://t.co/hNgcfwPVQv

This is why “broadcast bootcamp” is so over rated. Drew Brees being himself is 100x the buttoned up network version of Broadcast Brees https://t.co/znA6jznHpU

Brees retired following the 2020 season. He then went to work for NBC for a year as a Sunday Night Football broadcaster. Though that run was short-lived and now Brees is ready to try his hand in Hollywood.

Maybe he can get Bush a cameo or something as repayment for the big hit.