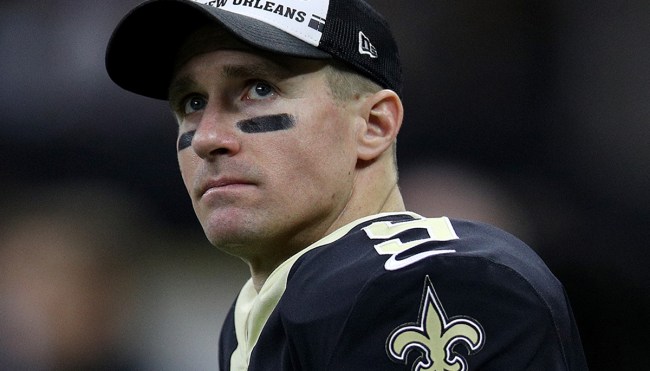 It’s been a little over a year since Drew Brees officially brought his NFL career to an end after 20 seasons by announcing his retirement exactly 15 years after he first became a member of the New Orleans Saints, and it didn’t take long for the future Hall of Famer to announce he was becoming the latest player to pivot to a career in broadcasting after hanging up his cleats.

Brees kicked off his new gig with NBC at the start of last season, and while he was certainly able to hold his own, the fact that his constantly fluctuating hair managed to garner more attention than his football analysis really tells you all you need to know.

It’s safe to assume most people thought he’d stick around for more than a year, but it doesn’t appear that will be the case based on reports that began to circulate earlier this week concerning an impending divorce between the network and the QB.

After the rumors began to swirl, Brees addressed them in a tweet where he said his plans for the upcoming fall are still up in the air while listing the variety of options he could ultimately opt for—including a return to football.

Despite speculation from media about my future this fall, I’m currently undecided. I may work for NBC, I may play football again, I may focus on business and philanthropy, I may train for the pickleball tour, senior golf tour, coach my kids or all of the above. I’ll let you know

It’s hard to imagine a 43-year-old who spent the last few years of his career battling the crippling shoulder issues that had a visible impact on his throwing abilities would seriously attempt to mount an NFL comeback—and based on what ESPN‘s Ed Werder had to say on Tuesday, it seems like that possibility can be all but ruled out.

As the reporter noted, Brees underwent surgery on his (non-throwing) shoulder earlier this month. That procedure was public knowledge, but the same can’t be said for the recovery timeline, as Werder says the most optimistic scenario would still keep him sidelined until after the start of the season in September (with an October return possibly in the cards).

Knowing Drew Brees over the years, I do not take seriously his recent social media posts about unretiring to play QB in the #NFL. For one thing, he had left shoulder surgery two weeks ago and would be physically unable to play until at least September or October, per a source.

Only time will tell how things ultimately pan out, but barring an incredibly unlikely twist, it seems like the Saints are indeed Jameis Winston’s team now.