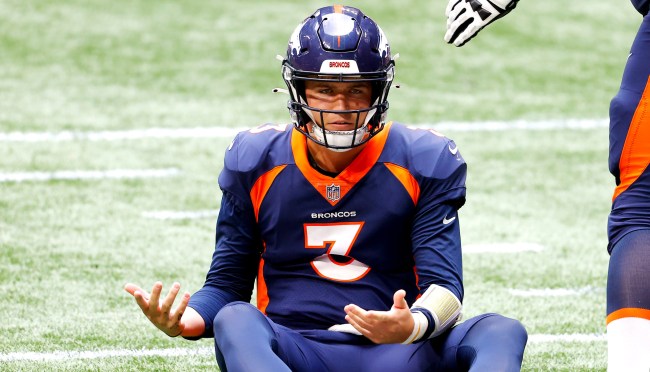 Rookie QB Drew Lock’s mom Laura went off on a lengthy Twitter rant ripping fans who criticized her son for the Denver Broncos’ terrible COVID situation at quarterback on Sunday.

In her lengthy Twitter rant, Laura Lock explained that her son Drew has been very careful, that he “wasn’t the one with COVID” and that the NFL was just using “one of their own as an example.”

It reads, in full…

“Shame – shame on the many for thinking that they can speak of others in damning ways. Here is the truth – Drew and the QB room requested permission to watch film. They came to the facility on their own time to put in more work. His leadership which seems to be in question by some brought them to this predicament; Drew asking for more commitment of his QB room than a normal NFL day. Drew and the QBs even requesting a room at the facility rather than risking ‘trouble’ and meeting at an off campus site.

“This is a group of 4 men that had tested negative that day and are with their people – their ‘ecosystem’ as we tell our children and friend groups. They let their guard down, they did not wear their masks the entire time they were in their socially distanced environment. …. It’s unfortunate – not damning. Does Drew take this virus seriously – ask his sister who visited and had to quarantine and test before arriving. Ask his girlfriend who has asked to not travel to away games. Ask his Dad and I who stay in a hotel on game weekends rather than his home.

“Oh and by the way he does not have Covid – he wasn’t the one with covid and I pray nightly, I hope he doesn’t nor anyone else get COVID,” Lock’s mother said. “Let’s interrogate those in the NFL that do have Covid – how safe were they being? Who was in their ‘ecosystem’ that shouldn’t have been or were they just not wearing their masks all the time?

“As a parent, an educator, a friend, a co-worker, a boss – using people to make an example of a situation is wrong,” Laura Lock said. “The NFL used one of their own as an example – this is where the shame is.”

Embed from Getty Images
As Laura Lock pointed out, Drew has not tested positive for COVID. In fact, the Denver Broncos as a group have so far recorded no new positive tests following Sunday’s game.

Broncos' COVID tests came back negative this morning, per source.

Lock, who did apologize for putting his team in that bad situation on Sunday, may still face discipline from Broncos head coach Vic Fangio for not following proper COVID protocols, however.