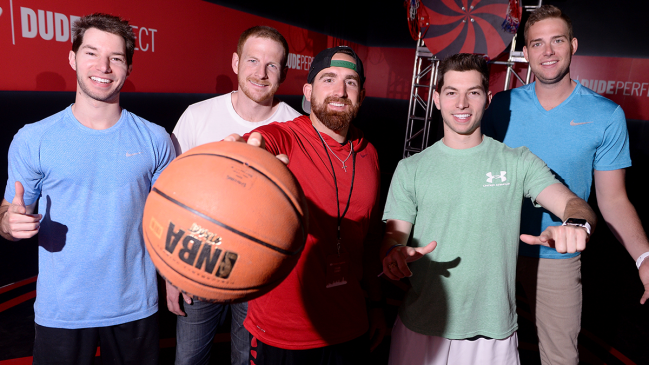 It’s been close to 15 years since a group of five buddies at Texas A&M went viral after uploading a compilation of basketball trick shots to YouTube in a video that harnessed the formula the quintet that dubbed themselves “Dude Perfect” would successfully harness en route to becoming one of the first groups of internet celebrities to leverage their online fame into sustained success.

The equation in question—which typically involves spending hours on end attempting crazy feats and running around like crazy while shouting “NO WAY!” or “LET’S GOOOOOO” after finally nailing them—was enough to transform Dude Perfect into a media empire that pumps out videos that routinely rack up tens of millions of views.

That approach turned out to be a very lucrative venture. The guys behind Dude Perfect have been able to supplement their YouTube revenue by selling tickets to live shows where they show off their trick shot prowess, and while no one was really sure why Amazon decided to tap the crew for a Thursday Night Football simulcast, it’s hard to hate on them for managing to land the sizeable bag that undoubtedly came with that contract.

It’s unclear how much that deal was worth, but it’s safe to assume Dude Perfect is sitting on a pretty solid fortune based on the insane new venture that was recently announced.

On Monday, Sports Business Journal reported Dude Perfect has teamed up with the San Antonio architecture firm that helped them whip up the plans for a massive home base in the form of the 330-foot tall HQ they’re hoping to build in an as-of-yet undetermined city—a project that “could reach nine figures” in construction costs when everything is said and done.

Sooooooo this is happening 🤯 https://t.co/5PsOSEEhSv

The elaborate compound would provide people who visit the attraction with the chance to attempt their own trick shots from the top of the massive tower in addition to bulking up on their Dude Perfect knowledge in the “museum that will chronicle the group’s origin story” (before presumably getting dropped off in a merch-filled gift shop).

As things currently stand, it’s unclear where the complex will be located; the company currently calls Frisco, Texas home, and while the co-founders expressed interest in staying local, they told SBJ that Los Angeles and Atlanta are also being considered.

The development generated some mixed reactions from both fans and skeptics

Dude Perfect can obviously credit its success to the millions of loyal fans it’s been able to attract since bursting onto the scene, and plenty of the group’s followers seemed to be intrigued by the concept.

However, there are also plenty of doubters who have trouble buying into the idea that Dude Perfect deserves this kind of shrine dedicated to their achievements.

It's gonna rule when they outbuild demand and half of this is like….the dmv https://t.co/WHSPy4c1lI

I've got no problem with Dude Perfect overall, this just doesn't seem like the best project to invest in though. https://t.co/bc1fls5d8v

Of all the irrational hate I have stored in my body, Dude Perfect has to be at the top of the list https://t.co/qVIyJotgsF

Others simply drew parallels between the proposed design and some other buildings it resembled.

I, for one, am more concerned with the plans to build the International Unboxing Museum I can only imagine we’ll be treated to at some point in the near future if this can be a thing.