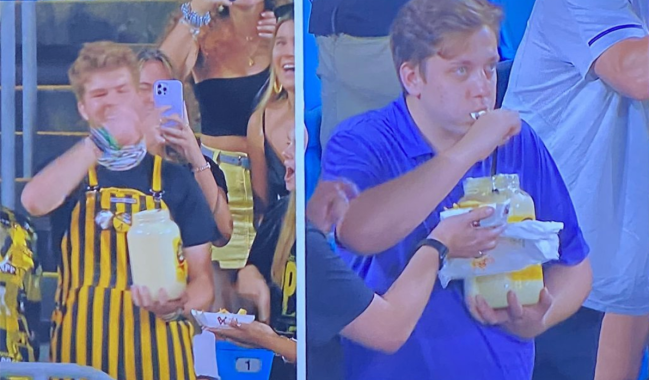 Duke’s Mayonnaise got involved with the sport last season and sponsored the first-ever Mayo Bowl. The company is back in 2021 and hosted the Duke’s Mayo Classic.

Pitting Appalachian State against East Carolina, the game was held at Bank of America Stadium in Charlotte, North Carolina on Thursday night. During the first half, Duke’s decided to get in a sponsored element that brought the fans into the matchup.

To do so, two opposing fans — one from ECU and one from App State — competed for glory. Both competitors were shown on the jumbotron trying to eat as much mayonnaise straight from the jar as possible.

It was equally as repulsive as it was captivating and entertaining.

A Mayonnaise eating contest going on at the ECU vs. App State game😳pic.twitter.com/9OBO6L9PvN

It is unclear as to which team won, but the Mountaineers stomped the Pirates on the field and won 33-19 in a game that wasn’t as close as the score indicates.

Duke’s contains a higher amount of egg yolk than most other commercial brands, which makes it more rich and creamy. It also makes it less likely to separate when heated.

Duke’s also has a hint of tanginess from vinegar and a touch of paprika. Its texture is thicker than its counterparts and has a custard-like texture as opposed to slick and gelatinous.

One thing is for sure, these two fans from Thursday night know all about how it tastes. Just ask them what they think.