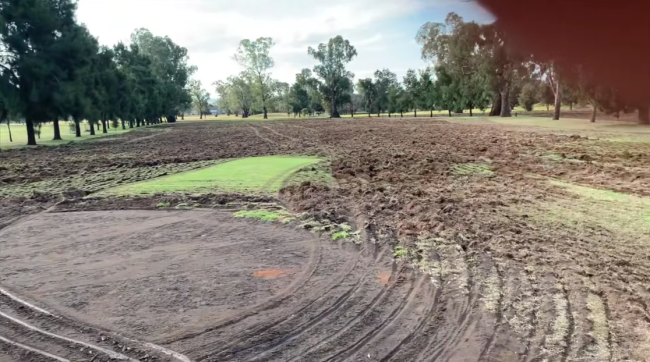 People vandalizing golf courses is nothing new. Unfortunately, we hear stories about fairways or greens being torn up by teenagers or some bored assholes every year, but what was done at Dunedoo Golf Club in Australia was next-level destruction.

You’ll usually hear about people driving cars, four-wheelers, or dirtbikes all over the course and ripping up the grass. It’s a pain in the ass, but that sort of damage is usually repairable and the turf will eventually heal in a month or so. It’s going to take much longer than that for Dunedoo to look like itself again.

Four fairways and several greens were completely torn to shreds. The property was legitimately plowed as if the vandal was some sort of farmer getting ready to plant crops. The fairways and greens aren’t even recognizable, as you can see in the photo above.

Golf NSW, the area’s governing body for golf in the area, uploaded a video showing the damage and it’s gutwrenching.

The course’s general manager told news.com.au that “the club is a community asset” and that people were “staring at the mess and starting to cry.”

According to the report, a 34-year-old man was arrested and charged with destroying or damaging property, using an offensive weapon with intent to commit an indictable offense, entering enclosed non-agricultural land to interfere with business, using a registerable class A motor vehicle on the road and possessing an unauthorized firearm.

Forget jail time, putting the alleged vandal in jail won’t bring back this golf course. Instead, the man should be sentenced to live in the maintenance building on the property and do nothing but repair the golf course until it’s in the best shape it’s ever been in, then he can serve his jail time or pay whatever fines are due.