Idiot Takes Range Rover For A Joyride On A UK Golf Course, Proceeds To Light It On Fire In A Bunker 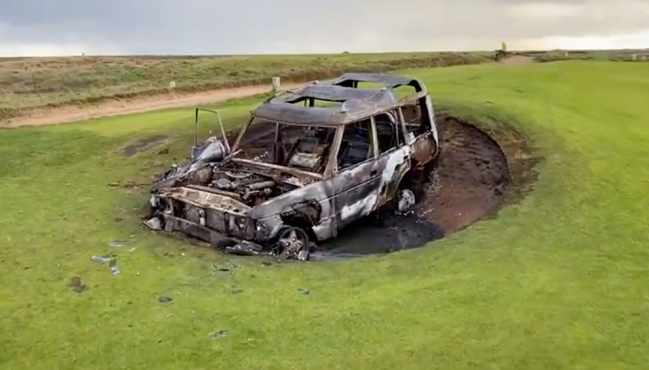 You have to be a special type of asshole to vandalize a golf course. Unfortunately, it happens quite often as many golf courses are easy targets for said assholes as most courses are accessible after the sun goes down.

You often hear about people taking their dirtbikes or four-wheelers onto golf courses, maybe sneaking onto the course and throwing a party, but this UK asshat may just take the cake when it comes to vandalizing a golf course.

This all went down in Deal, England at Royal Cinque Ports Golf Club, a very well-known course in the UK. Someone decided to take their own Range Rover, or steal someone else’s, drive it all over the course then eventually drive it into a pot bunker on the course. This person wasn’t done there, though, they apparently decided that wasn’t enough damage so they elected to light the car on fire and let it burn away in the bunker.

Very sorry for a Bledge and the RCP team. Course in outstanding nick despite this. Let’s hope the Kent Constabulary catch them? pic.twitter.com/swxd9BO5qh

There isn’t much information out there yet as to who may have pulled off this stunt, but seeing as how the city of Deal’s population is around 30,000, hopefully authorities can figure out what the hell happened here.

While this may seem like the wildest story involving a golf course this year, back in October some woman drove her car across the fairway of a North Carolina golf course, in and out of a bunker, into a pond, and was then rescued by the golfers that captured it all on video.

Then, earlier in the year we saw a teenager steal a Jeep and drive it across a Missouri golf course during a police chase.

Keep your head on a swivel when you’re on the golf course, there’s no telling what you may see out there.