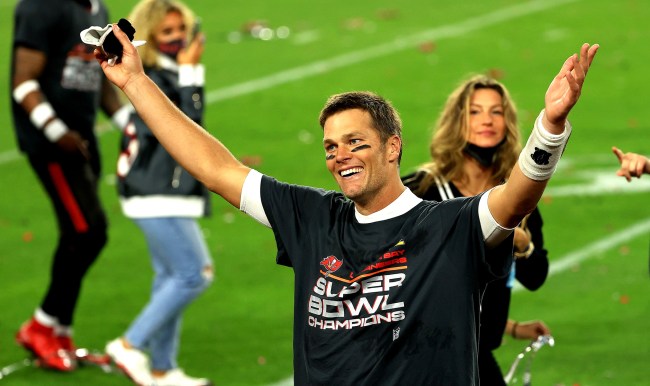 As soon as Tom Brady won his seventh Super Bowl (more than any single TEAM in the NFL has won) on Sunday, many fans were annointing him the greatest winner, and in many cases the greatest athlete, in the history of sports.

It's a simple question but a difficult answer.

Is @TomBrady the greatest athlete of all time? 🐐 pic.twitter.com/QFUo5lEiGZ

Greatest quarterback to ever play in the NFL? Even I, a longtime Brady loather, have to agree to that. Did I mention he has one more Super Bowl ring now than any single team in the NFL? Oh, I did? Because he does, and it’s ridiculous, but greatest athlete? I don’t know about that.

Not everyone was drinking the Kool-Aid though, as some fans wanted to bring up athletes, in addition to the people already named above, like Simone Biles, Usain Bolt, Lionel Messi, Cristiano Ronaldo, and others.

Dan Orlovsky of ESPN’s Get Up took things a step further, however, saying, “It’s the greatest Super Bowl run a quarterback has ever gone on. … Tom Brady is the greatest … winner in the history of team sports.”

"It's the greatest Super Bowl run a quarterback has ever gone on. … Tom Brady is the greatest … winner in the history of team sports."

Greater than Jordan@danorlovsky7 believes that if Tom Brady wins his 7th ring, he becomes “the greatest winner in team sports.” pic.twitter.com/cgRpbsqhAg

Not everyone agrees with him though, and one of those people is former Super Bowl winner Tony Dungy.

I love you Dan and to QB 7 SB wins is unbelievable. It will never be duplicated. But greatest winner of all time? STOP! Bill Russell...11 World Championships in 13 yrs. In win or go home games—2 NCAA Tournaments, 1956 Olympics and 10 NBA game 7s=Undefeated. No one has done that! https://t.co/U7pimMByHK

Dungy’s argument is certainly valid… and he will fight you if you say otherwise.

Win or go home= NCAA tournaments, Olympics and 10 game 7s in the playoffs. Never lost one of those games. Won championship as a rookie and then won 10 of the next 12 years. You can argue who was a better player but you can’t argue who won more.

You can’t be serious. How good do you think those teams were when all the good players were playing on 10 teams instead of 30?

Don’t even bring that up! 😀

So what will you say in 30 years when some guy wins 4 and you’re discussing it with your grandkids and they say the football in the 10s and 20s really wasn’t that good? 😀

Who is best is subjective but who is the greatest winner is fact. Michael Phelps’ gold medals, Bill Russell’s championships—you can’t say people won more than that. The statement was “greatest winner in team sports.” Numbers don’t support that.

You really think that’s the case. Jesse Owens being the best of his era doesn’t compare to Usain Bolt winning now? Babe Ruth’s hime runs not as impressive as Barry Bonds? Really?

What does that have to do with winning? You either win or you lose. And if you win the most we have to say you’re the biggest winner. Is Dustin Johnson a bigger winner than Jack Nicklaus because there are more golfers on the tour now? You’d laugh at me if I made that argument😀

In Orlovsky, and many other fans’ defense…