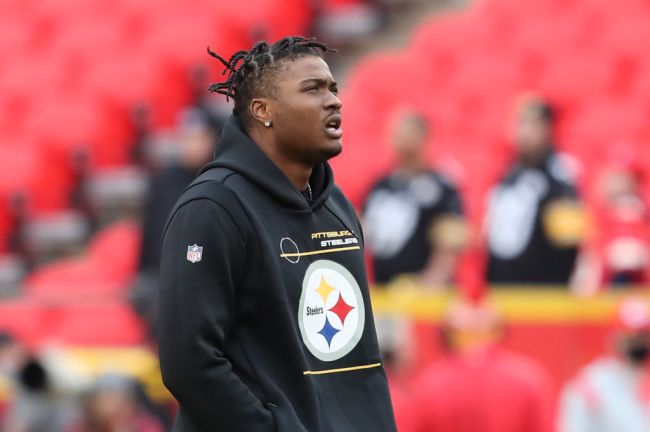 24-year-old Pittsburgh Steelers quarterback Dwayne Haskins has been killed in a car accident in Florida, according to ESPN’s Adam Schefter. According to Schefter, Haskins was training with other Steelers QBs prior to his death.

“Dwayne Haskins, a standout at Ohio State before becoming Washington’s first-round pick and playing in Pittsburgh, died this morning when he got hit by a car in South Florida, per his agent Cedric Saunders. Haskins would have turned 25 years old on May 3,” Schefter tweeted on Saturday morning.

Dwayne Haskins, a standout at Ohio State before becoming Washington’s first-round pick and playing in Pittsburgh, died this morning when he got hit by a car in South Florida, per his agent Cedric Saunders. Haskins would have turned 25 years old on May 3.

“I am devastated and at a loss for words with the unfortunate passing of Dwayne Haskins. He quickly became part of our Steelers family upon his arrival in Pittsburgh and was one of our hardest workers, both on the field and in our community. Dwayne was a great teammate, but even more so a tremendous friend to so many. I am truly heartbroken. Our thoughts and prayers are with his wife, Kalabrya, ad his entire family during this difficult time.

Once the news of Haskins’ passing became public, NFL fans and players alike took to social media to share their disbelief that something so tragic could happen:

Tell YOUR loved ONEs…. tHAT YOU LOVE THEM!!! ❤️

RIP Dwayne Haskins.. heartbreaking… Prayers to his family & loved ones.
Love yours while they’re here!

Oh my god. Haskins news is devastating and tragic. Was rooting for him to get his career back on track in Pittsburgh. So young. Rest In Peace.

It’s a reminder how fragile life is pic.twitter.com/b9KFrWbrnd

RIP to Dwayne Haskins. He said he was gonna go to Ohio State the first time he stepped foot on campus as a little kid. And he became a Buckeye legend.
pic.twitter.com/u05TZ7RS5g

Dwayne Haskins’ first major moment at Ohio State was as a freshman, taking over for an injured J.T. Barrett while trailing rival Michigan on the road in the 3rd quarter. Haskins would lead the Buckeyes to 3 scoring drives and a come from behind win. RIP 🙏 pic.twitter.com/HOi63mFArj

What happened with Dwayne Haskins is a legit tragedy. Just 24 years old and gone way too soon.

How someone thinks it's okay to add "struggled to catch on in Washington and Pittsburgh" in their report is beyond me.

Thoughts and prayers are with his family. Gut wrenching news

Will never forget the 2018 Ohio State – Michigan game where Dwayne Haskins was surgical. Tore apart the Michigan defense. 6 touchdowns that day was when it felt locked in he'd go Rd 1 if he declared.

One of the greats at Ohio State.

Dwayne Haskins was always pure class every time the OSU media spoke with him. Great young man. #RIP to one of the best young men and QBs in Ohio State history. So damn sad.

Our thoughts and prayers are with Dwayne Haskins’ friends, family, and loved ones during this difficult time.