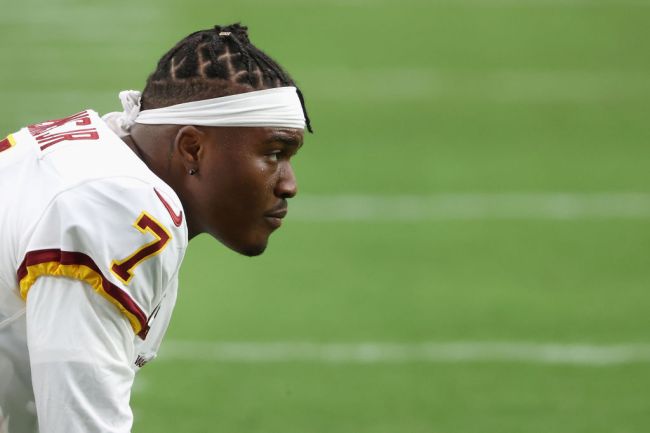 The reason why I love my wife is because in lieu of a glitzy engagement ring, she insisted I donate to a charity of her choice.

lol just kidding, I was given a template of grade, shape, color, and minimum number of casualties necessary to mine it. Needless to say, I’m going to be paying it off until Bronny James is inducted into the NBA Hall of Fame.

I blame no one but myself. And the cultural tastemakers who are setting an unrealistic standard for the common man.

24-year-old Dwayne Haskins recently proposed to his girlfriend, Kalabrya, Sunday at TAO restaurant in Las Vegas with a custom ring made by the famous Zo Frost.

Haskins is rich, but he ain’t that rich. He signed a one-year, $850,000 contract with the Steelers. Three years into the league, he’s made just shy of $15 million. That’s rich. But to drop six-figures on something that you can’t live in or drive in seems like a stretch of fiscal responsibility.

If anything’s been made clear in the culture, it’s that we’re all just trying to keep up with the Jones’s.

If she drops that puppy, it will be a lot louder hitting the ground than DeChambeau’s spikes. I don’t know if Brooks can survive that.

Patrick Mahomes got his Super Bowl ring tonight and then gave his longtime girlfriend one too. 😭❤️ pic.twitter.com/qicVGgg0XQ

Because nothing says death do us part like a blinged-out mortuary slab.

If you’re going to leave your girlfriend in limbo for 12 years by having two kids, an entire MMA career, and a $100 million net worth before proposing, you better extend that 3-month salary rule by two years.

6-carat emerald cut center stone with 3.35 carats on the band. You won’t find this at the kiosk in the mall while stuffing your face with an Auntie Anne’s pretzel, you poor.