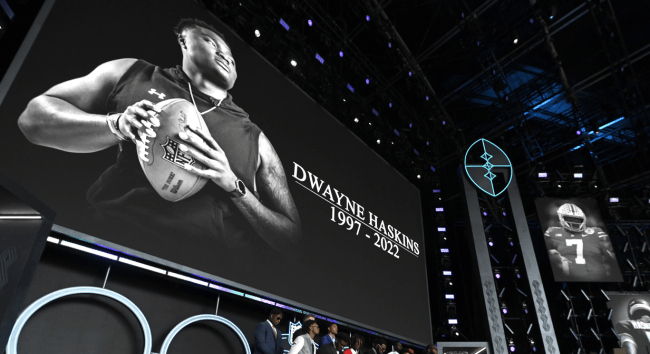 As Dwayne Haskins’ wife Kalabrya continues to mourn the shocking loss of her husband, she is also honoring him with a permanent reminder of him in the form of a new sleeve of tattoos.

Over the weekend, Kalabrya Gondrezick-Haskins revealed the new ink in a series of photographs posted to her Instagram account.

Captioning the post, “wearing my heart on my sleeve,” Kalabrya shared her inspiration for the new sleeve of tattoos.

The biggest tattoo is the image of her late husband’s face that covers most of her left shoulder. The other tattoos included copies of some personal notes Dwayne Haskins wrote to her while he was alive.

“Your [sic] my sunshine when it’s raining,” one note reads. “I want you in this life and the one after. I love you.”

Another note she had inked on her arm read, “To my blossom, Thank you for your patience. I know I’m not perfect but I see the perfection in you everytime I look into your eyes. Being your husband is my biggest blessing. You make me complete, I couldn’t live without you. Everyday I will show you I love you because how much you love me. I thank God for you!”

She also got one of Haskins signatures tattooed on her arm.

Last week, on May 3rd, Haskins would have celebrated his 25th birthday. On that day, Kalabrya wrote on social media, “King Wayne, God decided Simba needed a halo, instead of a crown for your mane. Life without you here brings so much pain. But today we celebrate your 25th reign. Your light was so bright, words can’t begin to explain… How proud I am of the man you became. Humbled to experience the angel Heaven just gained. My twin flame. I vow to always honor your name. Until we unite after this life again, Your soulmate, lover, & best friend. Xoxo, Kleo.”

Kalabrya and the late Pittsburgh Steelers quarterback were married in 2021. Haskins’ parents revealed prior to their son’s funeral that they would not be attending it because they had never met nor spoken to her and “didn’t want our son’s funeral service to be the place we met her for the first time,” they said in a statement.

Kalabrya Gondrezick-Haskins was charged with felony domestic violence battery after allegedly attacking Dwayne in July of 2021. Police reported that she cause injuries to Haskins that were “substantial in nature” including a split lip that required stitches and, according to the police report, he “would most certainly require dental work to repair his teeth.”

The charges were eventually dropped.