Dwight Howard Is Both Anti-Vaccination And Anti-Mask, Says Masks Are ‘Clickbait’ 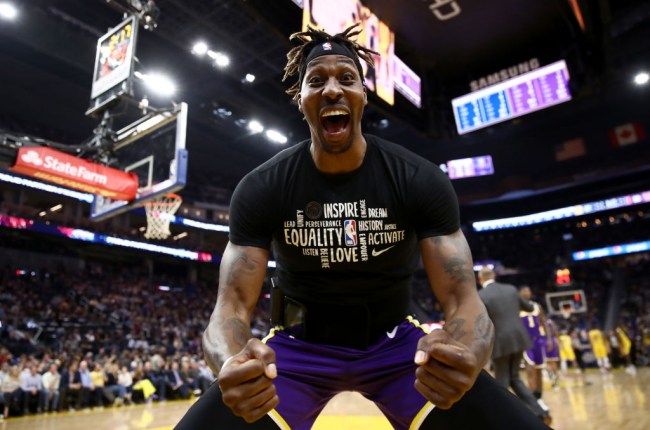 Dwight Howard, bored like every other player inside the NBA bubble at the moment, decided to jump on Instagram Live over the weekend and talk about some things. Instead of keeping it pretty generic and giving an update about life inside the bubble, Howard offered up his opinion on two high-profile, controversial topics.

Somebody in the stream asked the Lakers big man whether or not he believed in vaccinations and Howard revealed he’s anti-vaccination, like Novak Djokovic.

“Do I believe in vaccinations? No, I don’t,” Howard said. “That’s my personal opinion, but no, I don’t.”

Here is the clip from Dwight Howard’s Instagram Live saying he does not believe in vaccinations . pic.twitter.com/MJqV2UwieI

The topic of wearing or not wearing a mask amid the pandemic was also brought up during the stream and Howard shared that he doesn’t see the point in wearing a mask referring to masks as “clickbait for a controversy.”

“I didn’t know that the coronavirus be flying through the air looking for people,” Howard said.

Howard has been spotted inside the bubble not wearing a mask, not only during his Instagram Live stream but earlier in the week as well. We know this because another player snitched on him for not wearing a mask on the league’s anonymous hotline.

Players inside the bubble are asked to wear masks in most places inside the bubble. With someone snitching on Howard for not wearing a mask earlier in the week, it’s safe to assume the league issued a warning to Howard. Players are subject to fines or even suspension if health and safety protocols aren’t followed while on campus.