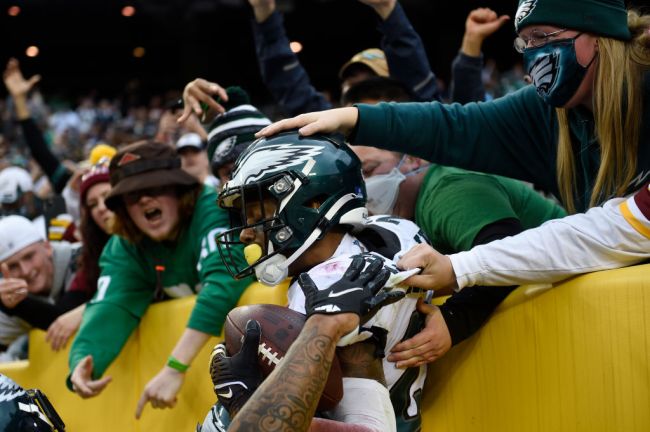 There aren’t many teams in the National Football League that make me feel better about being a New York Jets fan, but the Washington Football Team — who will reportedly be unveiling their new name and logo on Wednesday, February 2 (finally!) — is certainly one of them.

Perhaps worse than their on-the-field product, though, is their off-the-field issue, as the team is seemingly never *not* embroiled in some kind of controversy. The latest WFT mishap seems to be a combination of the two, though, as while it technically occurred on the field, it wasn’t during the actual game, and the fallout has been entirely off-the-field.

As you might already know, as Philadelphia Eagles QB Jalen Hurts was heading down the tunnel following Sunday’s game, a railing collapsed, sending a gaggle of Eagles fans tumbling to the concrete below, almost crushing Hurts in the process.

“To our knowledge, everyone involved was offered onsite medical evaluation and left the stadium of their own accord. We’re very glad no one appears to have been seriously injured. The safety of our fans and guests is of the utmost importance and we are looking into what occurred,” the official statement read.

Eagles fans actually involved in the incident have since disputed this statement, claiming they were, in fact, not offered any medical attention:

“They didn’t ask if anyone was hurt, and they sure as hell didn’t ask if anybody needed medical attention,” said Andrew Collins, 26, of Brooklawn, New Jersey. “The only thing the staff said to us was to get the F off the field.”

Mike Naimoli, a 26-year-old from Sicklerville, New Jersey, called that statement “completely incorrect,” saying that there was no medical assistance offered. Instead, he said they were told, “‘Everybody get the F off the field,’ and [they] quickly grabbed us away from Jalen and shooed us up into the stands.”

“They didn’t even ask, ‘Are you OK? Do you need help?’ Nothing. They just went about their day. Hurts was actually the one asking, ‘Are you guys OK?’ It was crazy,” said 22-year-old Marissa Santarlasci.

What an absolute clown show this organization is. They almost make the Jets look like the New York Yankees. Almost.