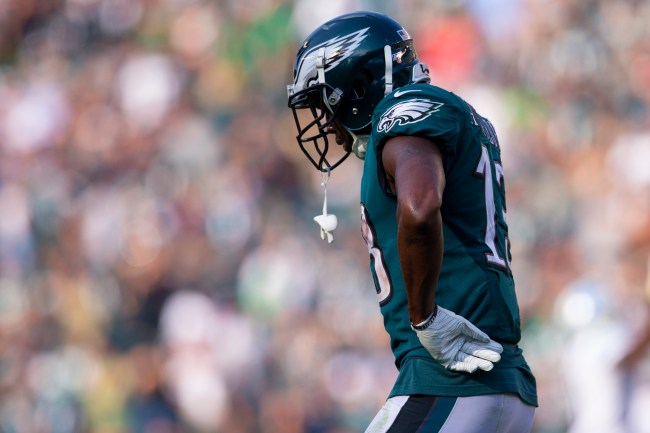 Eagles wide receiver Nelson Agholor was hoping his very shitty game would be glossed over in Philly’s 27-24 to the Detroit Lions, a good team??

Agholor, who dropped a sure touchdown late in the Eagles’ loss to the Falcons last week, dropped two crucial passes and fumbled in the Eagles loss, mistakes that were registered by Jason Peters and a cause of confrontation between the two teammates.

If you thought the 26-year-old receiver couldn’t feel worse about his role in the Eagles poor 1-2 start, the poor bastard woke up to be trending on Twitter, thanks to Philly resident and overnight hero, Hakim Laws.

Laws was in West Philadelphia early Monday morning when he stumbled across a burning apartment building.

Laws attempted to get the family on the top floor out using the stairs, but the smoke deemed that rescue tactic impossible. So, the man joined other good men and stood beneath the window that a father was dropping to safety. Laws heroism helped to ensure that no major injuries occurred from the fire. According to newsradio KYW, 10 people were rescued and six children were checked at Children’s Hospital of Philadelphia and are “okay.”

During an interview about the hectic rescue, the Eagles fan decided to deliver a burn (pun!) of his own on Mr. Agholor.

The most Philly soundbite goes to this guy who helped catch children thrown from a window during a fire. pic.twitter.com/3rH69gU2fL

“My man just started throwing babies out of the window, and we was catching em, unlike Agholor.”

That “Unlike Agholor” guy should never have to pay for another drink in Philly bar for the rest of his life.

“Unlike Agholor” is the best line ever to be uttered in Philadelphia. Even better than “Screw the British, let’s start our own country.”

The WORLD RECORD for most petty:

“My man started throwing babies out the window. We was catching them — unlike Agholor.” @Eagles #PhiladelphiaEagles https://t.co/IZOsVjwzxU

Someone get this dude season tickets or a bronze bust outside Lincoln Financial.

For the full story, head over to CBS Philly.