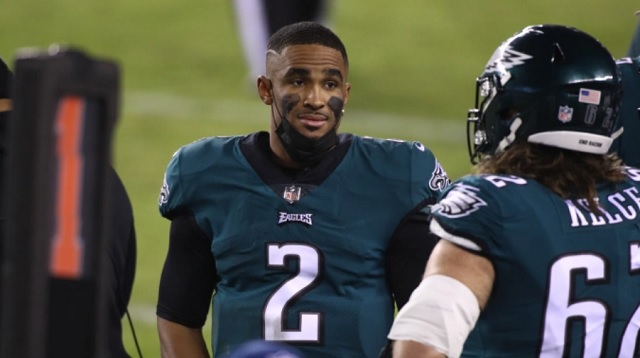 In the second half of the Eagles Sunday Night Football game, Pederson made the strange decision to bench Hurts to put in third string QB Nate Sudfeld.

Nate Sudfeld is in at QB for the #Eagles… Jalen Hurts might be done for the night for whatever reason.

After getting benched Hurts could be seen on the bench mouthing “it’s not right” while on the sidelines.

Hurts knew the fix was in. Clearly dejected. Obviously says “it’s not right” and shakes his head. pic.twitter.com/rSZibS4HZn

Sudfeld went on to struggle on offense and the team went on to lose the game.

After the game, Pederson denied he was openly tanking the game and claims he just wanted to give Sudfeld some reps.

Doug P.: Yes, I was coaching to win. Wanted to give Sudfeld some snaps. Decision was mine alone. … Don't think this game will have effect on our culture moving forward. … Don't know where reports of Wentz's dissatisfaction are coming from. We have a professional relationship. pic.twitter.com/1EEDMXG0qj