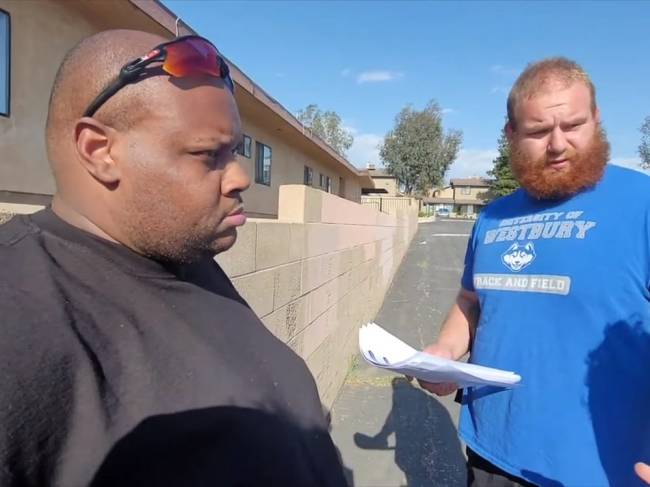 Eagles superfan Bryant Moreland, better known on Youtube under the username EDP445, was allegedly caught trying to meet a 13-year-old during a “To Catch A Predator” type vigilante sting operation and the police are getting involved.

The men who ran the sting operation, Alex Rosen and another man named Ghost from C.C. Unit, confronted Moreland, who apparently believed he was meeting with the 13-year-old Sophie outside of her apartment building.

Moreland admitted to sending the messages when confronted and says loneliness is what led him to interact with the 13-year-old in that matter.

YouTuber EDP445 caught allegedly trying to meet up with a 13-year-old girl after allegedly exchanging inappropriate messages with a decoy. In the messages, EDP allegedly acknowledges the age of the girl and later arranges a meet up with the minor. pic.twitter.com/mQJmvzS4RY

At the end of the video, an emotional Moreland walks to his car while the men call the police on him.

Look at EDP’s reaction when they were calling the cops 💀 Bozo was about to cry 😂 #edp445 pic.twitter.com/BuaxLVKFgS

According to various reports, the local police are now looking into the matter to see if Moreland broke any laws.

Breaking: Local Police are investigating EDP445 after many concerned citizens around the world flooded them with calls about him coming to meet what he believed to be a 13 year old girl! #DramaAlert pic.twitter.com/BWBoP8sWgF

California’s child pornography laws strictly prohibit the sending of obscene photos of minors, such as the showing of genitals which Moreland is accused of. As of now, Moreland has not been arrested as the police conducts their investigation.