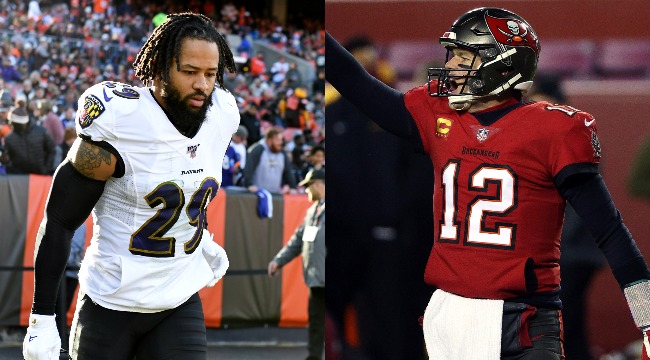 Tom Brady probably wouldn’t give me a lick of his avocado soft serve if I was withering away in the desert, but I will go to my grave fighting the narrow-minded mouth breathers who attribute two decades of unprecedented success to circumstance, soft footballs, or when we’re really scraping the bottom of the barrel:

[Related: When Will The Tom Brady Slander End?]

In January 2017, two years after Brady surpassed Joe Montana’s career Super Bowl touchdowns record in a win over his Seahawks, Earl Thomas made the claim that Brady’s success can solely be attributed to the AFC East’s incompetence.

Thomas was correct in the AFC East historically being warmed over cat shit (even though it had a better aggregate record than Thomas’ NFC West in the past decade), but he probably never expected his theory to be tested three years later, as Brady is on the brink of leading the Bucs to its first Super Bowl appearance in 18 years.

We must diligently expose bad takes for our children to live in a better, more honest world.

It’s funny how Brady made it to the NFC Championship his first season in the NFC and Earl hasn’t since he switched to the AFC 😂 https://t.co/uQRQ2keZnz

It’s clear Tom Brady only ever made Conference Championships because the AFC East is so easy… wait https://t.co/jcU3Y3MnN5

My favorite Brady fact from this season is his first year out of the AFC east the Bills are in the afc championship game with a legit chance to make the super bowl and the dolphins almost made the playoffs. Also Brady in the NFC championship game is downright silly. https://t.co/JXAKof75On

Since uttering this nonsense, Thomas’ Hall of Fame career has taken a toilet dive.

But Brady is trash because he plays the Bills twice a year. Who may also go to the Super Bowl this year.