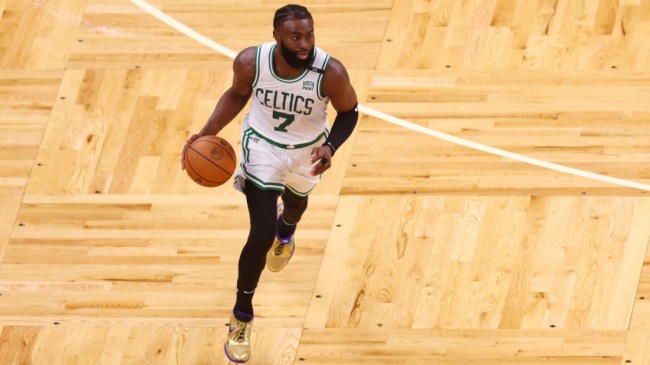 Despite already improving their roster with a move for Malcolm Brogdon after making it to the NBA Finals last season, the Boston Celtics have spent much of this offseason at the center of trade rumors.

Those rumors have mostly revolved around a potential move for Kevin Durant, with Jaylen Brown as the centerpiece of the hypothetical deals. Nothing has materialized for a Kevin Durant deal, but that doesn’t necessarily mean the Celtics will be able to hold on to their young star long-term.

An NBA executive revealed to heavy.com’s Sean Deveny that the Atlanta Hawks will be a contender to land Brown once his contract with the Celtics expires.

They’ve been after more two-way players in recent years, because signing up a few big names around Trae Young has not worked out. We’ll have to see what they do with (De’Andre) Hunter and (Onyeka) Okongwu because they will need extensions but if they can clear out the room, that’s probably the biggest team to worry the Celtics

The fact that Jaylen Brown is from Atlanta also seems to be a factor that could lead to him choosing the Hawks.

It’s no secret that Brown is a proud Atlanta native, and drove back to the city to help lead protests during the post-George Floyd marches in the late spring of 2020. When he was on the verge of becoming a restricted free agent in 2019, the Hawks were primed to lure him back home. His commitment to Boston as a community has long been strong, and as a city, Atlanta might be the only place higher on his list.

Brown was a key piece of the Celtics’ run to the Finals last season and if they are successful again this season, he’ll be a big reason why. Brown still has 2 years left on his contract with the Celtics, so this is still a bit off into the future, but the Celtics may need to fend off a rival in a couple of years to keep the team’s core together.