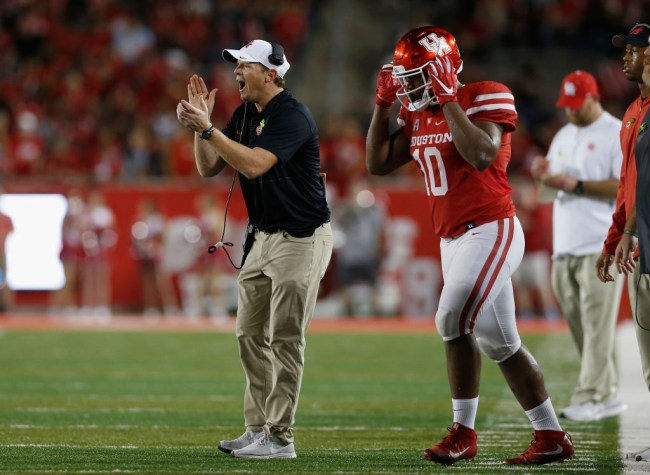 Houston whacked Tulsa on Thursday night by a score of 48-17 to advance to 8-3 on the year and solidify themselves atop the American West. All should be peachy in Houston. All is not.

Last night, Ed Oliver, star defensive tackle and consensus All-American as a sophomore in 2017, and Houston head coach Major Applewhite engaged in a heated exchange on the sideline. Over a coat.

It should be noted that prior to the season, Oliver announced that he will be entering the NFL Draft after his junior season but has been sidelined the past four games with a knee injury he suffered against Navy on October 20 on a super cheap chop block that was never called.

In any event, just before halftime, ESPN cameras captured Applewhite approach Oliver and signaling him to take off a heavy coat that is only reserved for active players. Oliver then blew up on his coach and had to be restrained by Rod Grace, the team’s director of sports performance.

Ed Oliver was HEATED when his coach told him to take off his jacket on the sideline 😡 pic.twitter.com/2OZUAXSrJ1

Oliver did not return to the sidelines for the second half and did not make himself available to reporters after the game.

After the game, Coach Applewhite attempted to sweep the incident under the rug:

“He got emotional, but he’s young and that’s what happens,” he said, per the Associated Press. “And he’s not playing. That’s hard. That’s difficult. I don’t hold anything against anyone. I’m just going to visit with him about it. I love him. I want him to be a part of our team. I want him to be with our team.”

Oliver is expected to be a top 10 pick in the upcoming draft and if I were him I would pull a Nick Bosa and just forgo the rest of the season until I see dollar signs. Especially if my coach is going to undress me, literally and figuratively, on national television for my wardrobe choice.