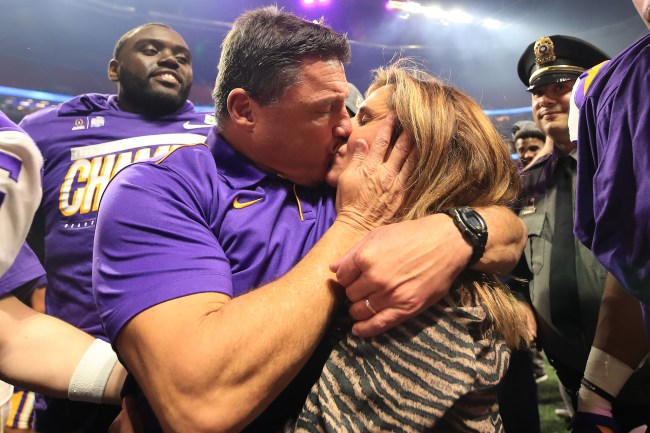 Ed Orgeron married Kelly in 1997, two months after the two first met on a blind date in Memphis before the 1996 Liberty Bowl when the Cajun coach was still an unknown defensive line coach for Syracuse.

The photo above was taken 23 years later, after LSU crushed Oklahoma in the Chick-fil-A Peach Bowl en route to a national title just two months ago.

It’s since been reported that Ed Orgeron has filed for divorce from his wife, with the divorce petition stating the couple separated on February 24, just two weeks after the Orgeron’s greatest professional achievement, and have lived separately without reconciliation since that date. 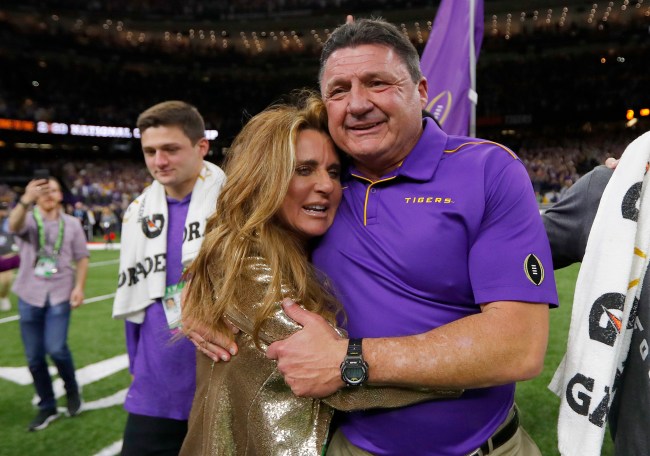 The two have raised three sons—and twin boys Parker and Cody, 22, and Tyler Spotts- Orgeron, who is from Kelly’s previous marriage and an offensive analyst on Orgeron’s staff. Could be awkward going forward.

Ed and Kelly’s two-decade run has endured some shit. Ed’s career forced him to live out of hotel rooms, while Kelly battled depression for nearly three decades, causing her to lose 25 pounds.

“I lost 25 pounds in a short time, and people in the community thought I had cancer,” she told Sports Illustrated in 2018. I was depressed for 30 years. I functioned, but you just put up that wall.

In May of 2017, a doctor accidentally punctured Kelly’s colon during a procedure, which led to a hole that caused so much pain in a two-month span, Kelly wished she were dead.

“I wish they would have never woken me up from this one,” she said aloud, and her husband roared, threw himself on top of her and screamed, “Me and the boys can’t do this life without you!”

Life. What a mind fuck.