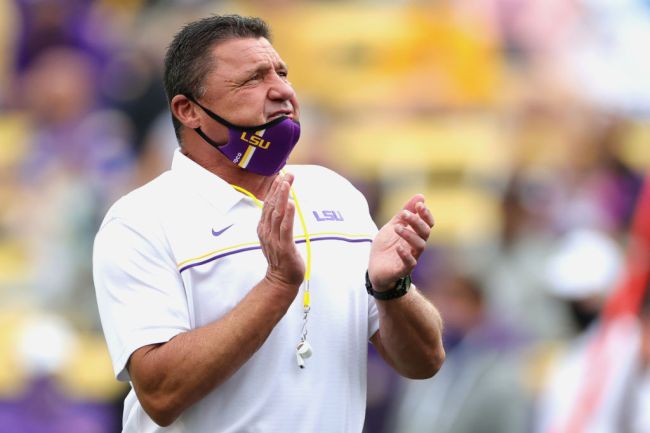 Coach O will no longer be the head coach of the LSU Tigers starting next season and one of the reasons the school decided to not bring him back is due to some embarrassing interactions with women off the field.

On Sunday afternoon it was revealed that Ed Orgeron would be allowed to coach out the season but would not be brought back as LSU’s head coach next season.

Orgeron is 49-17 at #LSU but is 9-8 since the championship. However, this goes beyond on-field results.

A strained relationship between coach & administration – rooted in team management & public/private behavior – has warped into an untenable situation, distrust & outbursts.

According to The Athletic’s Brody Miller, Orgeron chasing women off the field became a distraction for the team.

How did Ed Orgeron go from an #LSU national championship to fired in 21 months?

It's a story of off-the-field behavior, poor decisions and a whittling away of what brought success.

"He lost track of who he was."

The newly single Orgeron’s interactions with women bringing new distractions, and the changing off-field behavior coincided with declining on-field results.
“He lost track of who he was and what made him good from the national championship to now,” one source told The Athletic. There were coordinator hires of coaches Orgeron admits to not fully interviewing and embarrassing interactions with fans. There were viral photos of him in bed with women.

Then, at his most powerful — and his most wealthy — Orgeron was single again. He had just signed a six-year, $42 million extension and was a Louisiana hero. And he was going to enjoy it. “Something that had priority in his life that didn’t have a priority before was talking to (women),” one LSU source said. “That just became too high on the totem pole.”

To people and sources inside the program, there was no moral issue with Orgeron enjoying his life, but it was noticeable that football wasn’t his entire focus like it had been in years past, and it became a distraction. There was the infamous 2020 photo of him in bed with a woman, among other photos made public. Multiple sources said he brought women around the LSU football operations building.

It all took place as his decision-making and coaching performance declined.
“It was just a distraction,” one LSU player said. “In 2019, there was no, ‘What’s Coach O doing postgame or Sunday during the day? Is he laying by the pool with a lady?’ He was planning events other than football.

Miller goes on to describe one bizarre interaction Orgeron had with a pregnant woman at a gas station who turned out to be the wife of a high-ranking LSU official.

It created messes for him, like the time Orgeron pulled up to a woman at a gas station wearing exercise attire. “Hey, you look like you work out,” he said, according to multiple sources. “We could work out together.” The woman informed Orgeron she was married and pregnant, to which he responded, “Why does that matter?”

That woman was the wife of a high-ranking LSU official. Word of this reached the LSU Board of Supervisors, the collection of prominent Louisiana attorneys and business owners appointed by the governor who make the most important decisions at LSU. And of course, it reached LSU athletic director Scott Woodward.