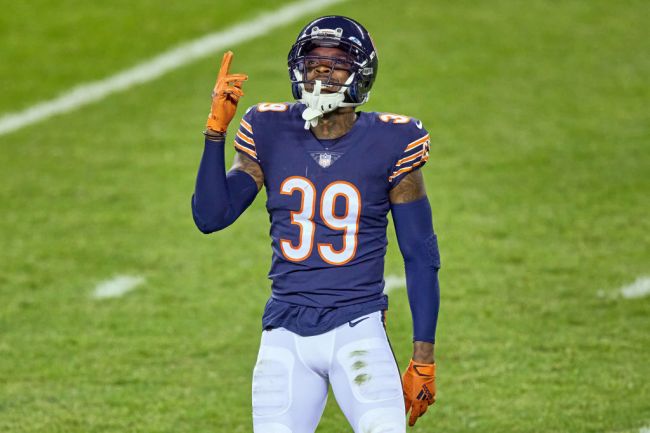 No NFL fanbase had a better Thursday night than Chicago Bears supporters. Heading into the first round of the 2021 NFL Draft, most Bears fans wanted to see the team make a move for a quarterback, especially if Justin Fields didn’t go No. 3 to the 49ers.

The first piece of the puzzle fell into place with San Francisco drafting Trey Lance, but the Bears sat at No. 20, they would have to convince a team in front of them to trade in order to get their guy, especially if they had Fields’ name circled. Chicago was then able to pull off the unthinkable by making a deal with the Giants to land the No. 11 pick marking the first time New York GM Dave Gettelman has ever traded down in a draft.

Then, it happened, Roger Goodell announced Fields to the Bears with the No. 11 pick, and every person in the Windy City screamed with both excitement and disbelief. When I say everyone in Chicago was pleased with the Fields pick, that includes Bears safety Eddie Jackson.

Jackson hopped on Instagram Live after the pick was made and took a direct shot at all the former Bears quarterbacks.

“About time we got us a real quarterback. How about them Bears?” Jackson said.

Tough scenes for the likes of Mitchell Trubisky and former Super Bowl MVP Nick Foles, but it’s especially a direct shot to Andy Dalton, who the Bears publically named QB1 after signing him earlier in the offseason and is still very much on Chicago’s roster.

When you play for a franchise that traded up to draft Trubisky ahead of both Patrick Mahomes and Deshaun Watson, you can publically say things like Jackson did here. While the expectations for Fields are unbelievably high, Jackson spoke nothing but the truth, and there’s no shame in being excited to have a top-talent QB coming into the system with such a high ceiling.