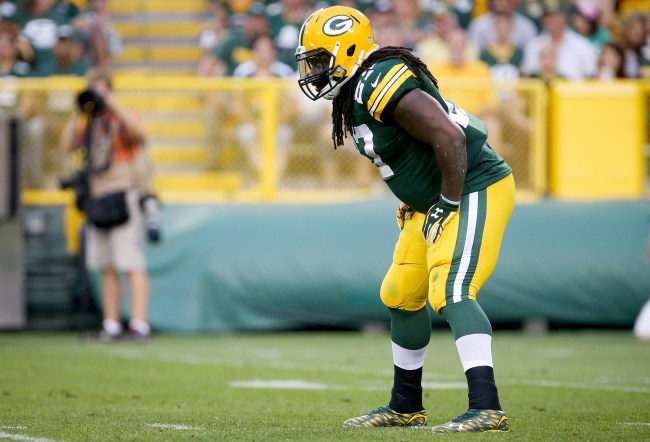 Former running back Eddie Lacy spent five years in the NFL, posting back-to-back 1,100-yard seasons to begin his career en route to being named the NFL’s Offensive Rookie of the Year in 2013.

The Alabama product spent his last season with the Seattle Seahawks in 2017, and has since hung up the cleats, as the second half of his career fell short of the standards he set for himself in his first couple years with Green Bay. The dominant indicator of a career cut short was Lacy’s struggles to cut weight, an ongoing battle that he opened up about in September of 2017.

“I could pull up my Twitter right now and there would be a fat comment in there somewhere,” he says. “Like I could tweet, ‘Today is a beautiful day!’ and someone would be like, ‘Oh yeah? You fat.’ I sit there and wonder: ‘What do you get out of that?'”

Lacy’s weight issues extended beyond Twitter trolls, with Seattle requiring Lacy to agree to periodic weigh-ins to shed the weight he put on after ankle surgery. He would make $55,000 every time he hit a weight goal.

Even in retirement, the 28-year-old can’t seem to escape the trolls. On Tuesday, a fan reached out and asked Lacy if he has any plans to return to the field.

I think about it but I’m to undecided https://t.co/BYnHS8kmJz

The innocent comment prompted a dude to sub-tweet a comment about his long-standing love for “china food.”

Granted, the fan could just have been razzing Lacy, as his love for “china food” has become a self-inflicted meme.

presenting the most dangerous one-two punch in the NFL: Eddie Lacy and china food pic.twitter.com/X0Oa8kNyiH

Back in 2017, Lacy told ESPN that he simply could not avoid the urge to tweet about his beloved china food.

“I always called it China food,” Lacy, 27, says with a grin. “There is no way around it, I love sesame chicken and shrimp fried rice so much. It’s awesome.”

He chuckled at first, but the collage also stung. It kept showing up in his feed, an endless cycle of snark, rebooted each day. “It sucks,” Lacy says. “It definitely sent me into a funk. I wish I could understand what they get out of it.”