Eduardo Escobar Made History By Hitting For The Cycle With Two-Out, Two-Strike Triple In The 9th 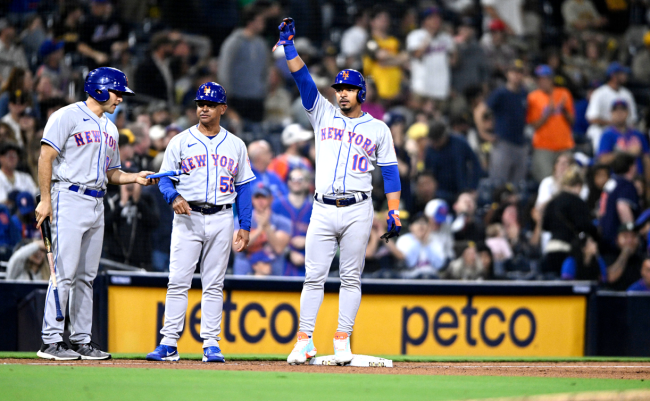 While going 4-for-4 with four home runs is about as good as a baseball player can do while batting in a game, hitting for the cycle – a single, double, triple, and home run – while not nearly as rare (18 times versus 335), is just about as exciting for fans to watch. Just ask New York Mets fans how they feel about Eduardo Escobar today.

Escobar, the Mets’ new third baseman, had been struggling at the dish so far, batting just .241 on the season, but you can’t get any hotter than he has been lately.

Monday night, Escobar had just a single and a double after his first three at bats, nothing special there. In the final two innings of the game, however, he was on fire, hitting a two-run home run in the eighth and a two-run triple in the ninth two strikes and two outs.

In doing so, Escobar became just the 11th player to hit for the cycle in Mets franchise history, the first to ever do it at San Diego’s Petco Park, and the first player in MLB history to complete the cycle with a home run in the eighth inning and a triple in the ninth.

He said after the game that he knew he needed the triple in the ninth inning and was telling himself as he went up to bat, “If the ball is in the park I am going to run to third base.”

“I was happy he did,” shortstop Francisco Lindor said, echoing the thoughts of Monday’s starter Carlos Carrasco. “Those don’t come too often.”

“Anytime, it’s fun to watch but especially him — you know how much he means to his teammates and it’s almost like they [all] hit it,” manager Buck Showalter added.

“They told me all the time, everything will be fine for you,” Escobar said about his early season struggles, Newsday reported. “Continue working hard, because it’s [the only thing] you can control, you know? Because your moment is coming… It’s really tough [to stay confident when things aren’t going well]. It’s really, really, really hard. But when you have the special group that you have here — [Pete] Alonso, [Starling] Marte, [Brandon] Nimmo, Buck [Showalter], the hitting coach [telling] me every day that everything will be fine and working, working, working. That’s the only control I have. I don’t control the result but now you see the result is coming.”

Yes we do, and baseball fans absolutely loved it.

You should've been in the crowd behind the dugout, overrun with Mets fans!

Feels good to see Escobar starting to do well. True professional and a great teammate.

ESCOBAR IS THE DAMN BEST🥲🤩 pic.twitter.com/qWZCVzG7vT