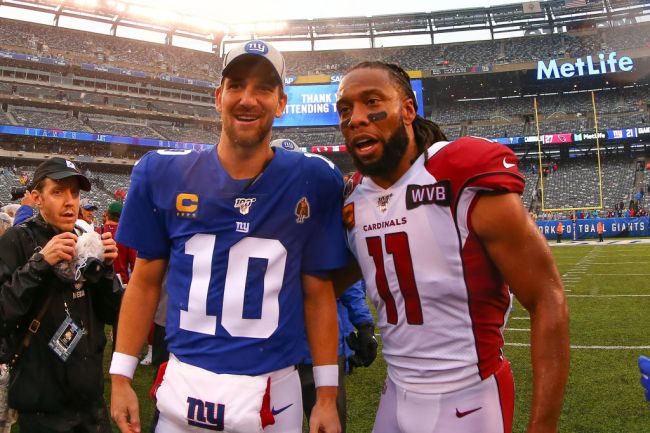 It’s safe to say that Eli Manning is living his best life in retirement. His handicap has probably dropped a few numbers, he’s likely spending more time with the family, and he’s even decided to get the hell up out of New Jersey which most would agree is never a bad plan.

One thing we know that Manning hasn’t been doing a whole lot of since he hung it up is actually throw a football. In fact, he’s tossed the pigskin just one time since his final game in the NFL on December 29, 2019, and it was under very unique circumstances.

“So, since December 29 [the final day of the Giants’ 2019 season], I’ve thrown a football one time,’’ Manning told The NY Post. “One day, a buddy of mine asked if I would throw him some routes. He was in the area and I said I would do it just for him.’’

That buddy Manning is referring to is future Hall of Famer Larry Fitzgerald. He was in the Jersey area in mid-July and decided to get some work in on a random practice field so he called up Manning. At first, Manning wasn’t going to do it, but he eventually gave in, like anyone else would if Fitzgerald is asking you to throw a few passes.

“I said, ‘I’m not throwing, Larry, I haven’t thrown in seven months,’ ’’ Manning said of his conversation with Fitzgerald. “He was like, ‘C’mon, you can do it one time.’ “I think we both looked old. It worked out. I can’t throw it that far and Larry can’t run that far. Pretty good timing, my deep ball and his 4.9 speed worked pretty well together.’’

The two got in a quick workout throwing and running about 40 routes.

As for any other sporting activities outside of a definite few rounds of golf, Manning said that he’s picked up tennis since retirement. Eli Manning on a tennis court would be a site to see, that’s for sure.