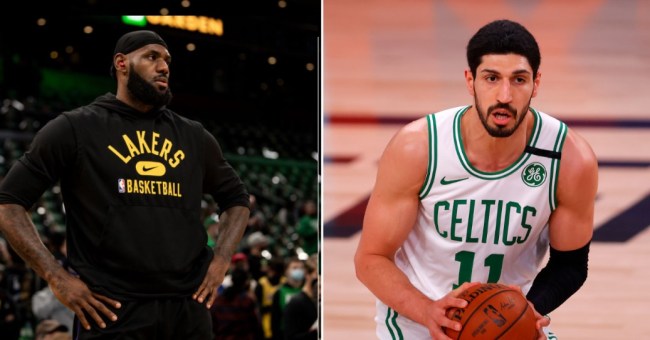 Enes Kanter appears to be keeping his thoughts about LeBron James strictly on social media.

Before Friday’s Lakers-Celtics game, Kanter ripped LeBron to shreds for ignoring slave labor in China in a scathing Twitter post.

Kanter even wore sneakers that show the Lakers start bowing down to Chinese President Xi Jinping.

Boston Celtics player Enes Kanter wore sneakers tonight — while playing against the Lakers — with LeBron James bowing down while China’s dictator puts a crown on his head. pic.twitter.com/E1L4ZyPWrF

Despite Kanter’s bravado on social media, the Celtics big man completely avoided LeBron while the two were on the court at the same time, which led to some interesting reactions from fans.

Moments after LeBron James walks on to the floor to warm up, right behind him is Enes Kanter who has on more than one occasion, called out LBJ for not speaking out more on social injustices outside the US. #ackward pic.twitter.com/l8lBkXcJvN

Kanter couldn’t even look at LeBron. So much for “courage.” https://t.co/Heq2sbaEc8

bro got his tweets off but can’t even look at him😹 https://t.co/XGX3IcfFxy